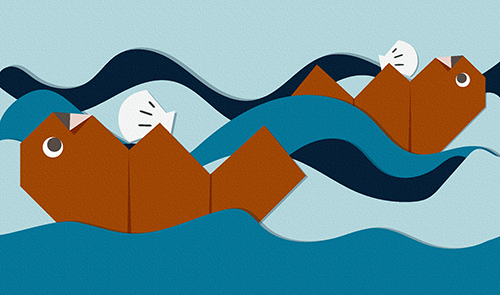 Third year Dominic Kausin led viewers through a hands-on demonstration of how to construct an origami otter. Staying true to CSUMB’s mascot, Kausin said his interest in origami began during his younger years. “I practiced origami for about three years in high school, and some towards the end of middle school.”

“I used to make frogs,” Kausin said, commenting on his desire to practice more complex figures. “When you would press down, they would jump.” While there is paper made specifically for creating origami, Kausin was able to construct a beautiful, realistic otter with regular paper, giving beginner to advanced origami artists the ability to easily follow along at home.

CSUMB students Anna-Nicole Vasquez and Victoria Barrett helped initiate viewers’ creative sides by transforming jars into interstellar galaxies. Using glitter, paint and water as the supporting materials, looking within one’s imagination fueled the inspiration for designing an other-worldly experience. Those who did not have the materials to build a galactic jar were advised to use paper and colored pencils.

Barrett and Vasquez both come from crafty families that have influenced their artistic sides. “For as long as I can remember I’ve been doing arts and crafts,” Barrett said. She finds drawing and using paint to be stress relieving, but most importantly, fun.

“I find baking to be an art of its own,” Vasquez said when commenting on her favorite type of craft. “While I love drawing and doing crafts, I prefer to bake.”

By hosting a virtual craft night, CSUMB students were able to maximize Friday night fun, while maintaining a safe distance from one another.

Students needing a break from classes and homework can leisurely embrace arts and crafts. Currently CSUMB does not have another crafts night scheduled, but those looking to get creative can try new techniques such as origami or painting galaxies to relieve stress.