President Ochoa reflects on his time at CSUMB 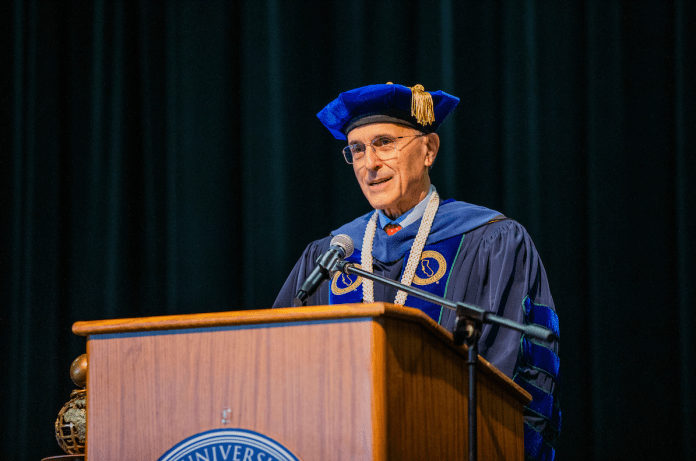 Thinking back on some of his memories with the university, President Ochoa paused to pinpoint just one favorite memory, saying it was hard to single it out. “[There have] been a lot of good experiences.”

However, one thing he wanted to spotlight was a campus-wide retreat at the Hyatt hotel in Monterey, where he and attending faculty spent the whole day re-engaging with CSUMB’s vision statement. He took it as an opportunity to look at what makes CSUMB unique from other universities.

“Rather than just look to the vision statement as this totem that we bow and scrape to, we should look at it as a living document that has very important ideas and do it justice by engaging with it,” he said. “We proceed to unpack it and really look for the content, and figure out which parts of it were fundamental and unchanging as part of what we are, which parts of it still were valid although they might at some future date change, and which parts of it have superseded with changes in society.”

Ochoa was proud of this experience, and felt it brought the university together in a new way, bringing staff and faculty from different departments together to reconnect with the goals of the university.

Ochoa spoke highly of the position educators hold. He always loved the interactions with students, faculty, staff and the community.

He explained he will miss “the community feel, the sense that you’re a part of a larger enterprise that is doing good things,” Ochoa said. “I’ve often said throughout my career when I address faculty and staff, we are really fortunate to be working in an industry where we can be proud of our product. We don’t have to feel guilty about doing something that has some bad side to it.”

“To be able to work on something that has purpose is a real privilege and an honor. I’ll miss that. I’ve made my contribution and I think it’s appropriate now for a new president to come in with another injection of fresh ideas and energy.”

During his time as the CSUMB president, Ochoa has focused on helping the university develop more distinctive programs that are unique to the campus. As the campus has developed, with strengthening the internal structure and removing blighted buildings, CSUMB has also reached a “certain level of maturity as an institution. We were ready to take up our role as regional stewards, helping the region develop in a thoughtful, strategic way economically, but also socially and culturally,” Ochoa explained.

“I’m really proud of what this campus as a whole has been able to do these past 10 years,” Ochoa said. “These are not my accomplishments, they’re accomplishments of the entire campus community. I feel fortunate and honored to have been able to lead that effort.”

One of the accomplishments Ochoa spoke most on was helping strengthen the surrounding campus community, particularly with K-12 programs. Looking back at when he first became the CSUMB president 10 years ago, Ochoa and his colleagues noticed the county’s educational level was considerably lower than the state average. They had noticed there were too many students who were not college-ready, and even not graduating high school.

President Ochoa took this opportunity to reach out to CSUMB’s K-12 partners and find a way to help them. Ultimately, they created a “cradle-to-career educational partnership called Bright Futures, which is really helping improve the educational outcomes in Monterey Country in K-12, so that we can actually serve more students and provide greater access to students, to young people in this area.”

More information on the program can be found at https://brightfuturesmc.org/en/home-2/.

President Ochoa has also worked to set the next CSUMB president up for success, and hopefully achieve similar accomplishments to Ochoa that align with the university’s mission statement.

“We have some things that are in progress that I certainly hope will reach fruition. One of them is our first engineering program in mechatronics, which we have gotten permission to develop from the CSU, but we need a new science and engineering building to house it,” Ochoa said.

The private sector has given CSUMB nearly $20 million to help fund the new building. CSUMB is hoping the state will come in with the rest of the money to fund the construction of the new building, which will total around $100 million.

President Ochoa explained this was incredibly important because the university is working to diversify the economic base of the region, so CSUMB graduates won’t need to leave the area to find jobs that align their qualifications and degrees.

“That would complete the whole cycle. We provide access so that students have educational opportunities from Pre-K all the way to a career, and then there’s a job here that doesn’t require them to leave the area,” Ochoa said.

President Ochoa also shed some light on a current issue he hopes the next president will be able to resolve, regarding the old VA clinic that used to house veterans. They had been trying to solve the issue quietly and were holding off on turning to the press, “but frankly it doesn’t look like it’s going to be resolved quietly,” Ochoa said. “I’m willing to have a parting shot at this issue.”

“Now they don’t want to move out,” Ochoa said. “Unfortunately at the time apparently that this was going on, nobody put this stuff down on paper so now the VA bureaucracy in Palo Alto does not feel bound by it. We’ve tried to appeal to the secretary of the VA department to no avail. We’ve had Congressman Panetta working on it to have the VA relinquish this facility and they have not been successful.”

“We would have preferred it became available to us for our educational mission as part of the university,” Ochoa explained.

CSUMB has offered to lease the building for an expended period of time and in exchange provide them with some of the residential units in East Campus that will give them easy access to the Veterans Transition Center.

The Monterey area is very eco-conscious, and this extends to the CSUMB campus. CSUMB’s commitment to sustainability has set it apart from other universities, and President Ochoa used the COVID-19 as an opportunity to strengthen our sustainability.

CSUMB has made a commitment to staying carbon-free, in terms of our carbon footprint by 2030.

“We’ve made that commitment and we’re continuing to work on that,” Ochoa said.

“An interesting project that we did when we entered the pandemic was that we went around and shut down all of the equipment across the university that was spending electricity in a sort of ‘standby mode,’ – they call it vampire loads,” Ochoa joked.

He went on to explain, in order for some of these electronics to utilize a quickstart mode, they need to already be running. The school decided to turn everything off, so it wouldn’t use any electricity and ultimately reduced our carbon footprint.

President Ochoa was also very happy that the university was able to use the COVID-19 pandemic as an opportunity for the school to go paperless and use digital methods instead.

“A lot of our forms, retention, tenure and promotion packets that the faculty had to put together- they were huge and they cut a lot of trees to do that. So all that’s gone now, we’re doing it all paperless.”

Ochoa wasn’t sure at first what he wanted to do as he goes into retirement. He explained any time people would ask him about his plans he would “start grasping for answers.”

“Finally, I’ve decided I’m going to tell you the real bottom line, which is I’m going to just enjoy life. I’m just going to take the time to smell the roses, to do the things you’re too busy to do when you’re working.”

He explained, he will likely want to get involved with some things later into his retirement, but wants to give himself some time just to relax.

President Ochoa hopes to leave the campus community with a few key takeaways from his time with the institution.

“A core message that I would want to give you is that we’re in a difficult time in the world right now and in the country, there’s a lot of polarization that’s happening and it’s unfortunate that there’s a lot of anger and emotion and a real scarcity of reasoned thinking and dialogue,” he said.

He stressed higher education has a responsibility to produce graduates with training in critical thinking, can debate ideas without reducing it to personal attacks, and can base their arguments on evidence, and can keep an open mind.

“All of those habits of thoughts and ways of being, you’re going to be beacons of that when you come out. The community needs you to provide that light in the darkness right now, so that’s your mission.”

President Ochoa sees a bright future for the campus and the graduates that CSUMB is putting out.

“We can achieve anything we put our mind to and we have the institutional capacity to do it, so there’s no limit.”

It comes in waves

Poem by Andrea Valadez At first it’s the kind of wave that looks inviting and make you want to walk in slowly just to feel...
Read more
Poetry

The Childhood I Am From

Poem submitted by Gloria Salcido I am from Wood-panel walls A Bible and notebook left open on the couch Men’s dress shoes and boys’ sneakers strewn about the living room A...
Read more
News

Story by Max Guerrera  The San Francisco Board of Supervisors reversed their decision (which originally passed with an 8-3 vote) Dec. 6 to authorize a...
Read more
News