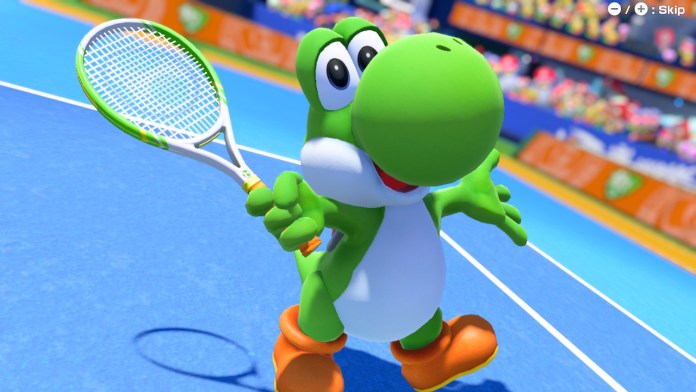 When thinking about the Mario franchise, tennis games are probably not the first thing that would come to someone’s mind. There have been seven tennis-themed Mario games with “Mario Tennis Aces,” being the latest addition – releasing in 2018 for the Nintendo Switch.

The controls feel overall fluid, but there are a lot of mechanics and advanced moves which can be a lot to take in, especially true if players aren’t interested in going through the story and want to jump straight into freeplay.

“Mario Tennis Aces,” has a variety of different game modes including a story mode, freeplay, mini games and tournaments.

The online is much more intuitive than other Nintendo games. The loading screens into online matches are significantly less annoying, and you don’t need to reconnect after every single match. The game will maintain connection to the internet until you go into a different game mode.

Before getting into an online match, players are able to invite their friends into a lobby so they can group up before playing with random people. If two people are playing on the same console, they are still able to go into online matches and compete in tournaments.

Every game mode – other than the story mode – can be played online with friends.  In a time where many of us are separated due to quarantine, this offers a unique opportunity to spend time with friends and family you aren’t able to see in person.

For players not interested in going online or who don’t have the online subscription, the free play and story modes are still a great option. In free play, you can choose either single or double matches, meaning either a 1v1 or 2v2 game of tennis. A.I. will fill in the spaces where there are no players.

While the different game modes are fun and keeps the game interesting, “Mario Tennis Aces,” is not worth the $60 price. It feels like an extra $20 was added to the price for containing “Mario,” in the title.

If this goes on sale for $30 or $40, then it is definitely worth picking up. It is a surprisingly fun game, even if it doesn’t seem all that interesting based on the title.

When Nintendo announced “Switch Sports,” it was like being transported back to 2006, when “Wii Sports” was released and became the best-selling game for...
Read more
8 Bit

“Embark on a unique and unforgettable journey and guide Sable through her Gliding; a rite of passage that will take her across vast deserts...
Read more
8 Bit

Cat Cafe Manager is cute but needs some improvements