FORTAG: A buffer between you and the developed world 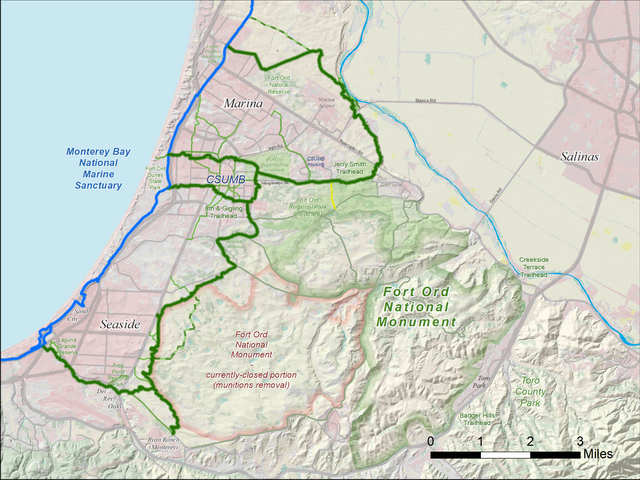 FORTAG stands for the Fort Ord Rec Trail and Greenway. It will be a 30-mile regional network of paved recreational trails and greenways connecting communities to open space. The trail will connect California State University, Monterey Bay (CSUMB) to the Fort Ord National Monument, to the coast, dunes, down to Monterey, and then to residential communities nearby like Marina, Seaside, and East Garrison.

FORTAG will facilitate active transportation, by expanding our region’s opportunities for traveling between home, work, and commercial areas by foot, bike, or wheelchair. It’s a way to get from A to B while enjoying the landscape.

Although the involvement of the project FORTAG includes a cast of hundreds, Professor Fred Watson and Professor Scott Waltz have taken on the leadership role.

Professor Watson is an environmental scientist. He’s lived and worked on Fort Ord at CSUMB for 20 years. He’s become increasingly motivated to make sure that we reuse Fort Ord to the fullest and most balanced extent possible.

Professor Waltz came to CSUMB roughly 13 years ago. He’s in the college of education and his field is generally liberal studies. In the past he was an environmental educator and interpreter. He’s had a continuing interest in the environment and conservation, so he got involved a number of years ago with the Sierra Club. His involvement in the Sierra Club led to his involvement with the broader matters of Fort Ord, particularly the environmental matters.

Fred and Scott met roughly 10 years ago, but about five years ago they both had a shared realization that they should step up and take initiative to help their community.

A year and a half ago the community passed Measure X that would allow for a number of transportation projects. The Transportation Agency of Monterey County (TAMC) spearheaded the effort. The TAMC is in charge of implementing projects and distributing funds. FORTAG has $20,000,000 of tax funding over the course of 30 years.

With the growth of the campus, FORTAG will make getting around campus easier and safer. Since safety is the top priority of FORTAG, lighting is part of the plan to be placed throughout the network, so that the trail can also be used at night.

There’s roughly a 10-year time frame to build the entire thing; however, it’s not like you must wait the full ten years to start using it. Professor Watson and Professor Waltz are optimistic that incoming freshmen will be able to experience FORTAG by the time they graduate.

With the accessibility, length, and loops of FORTAG, it can be used for training by the athletic sports teams in the community.

Story and photos by Dee Davila The cool and mild weather that envelops the Monterey coast is perfect for anyone who wants to enjoy a...
Read more

Due to recent events of Iranians and their education systems having an impact on world peace,  state department official Andrew Loomis and local novelist...
Read more
News