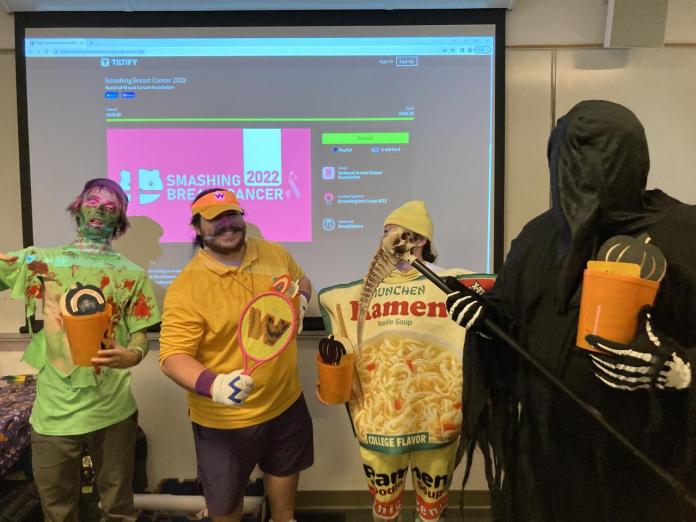 With October celebrating both Halloween and breast cancer awareness, the Super Smash Otters Club threw their yearly charity “Super Smash Bros.” tournament where they raised $769.69 for the National Breast Cancer Foundation, surpassing their goal of $500.

The contest was voted on in four separate categories by the people in attendance: best gaming costume, funniest costume, most creative costume and scariest costume.

The best gaming costume went to someone dressed as Tennis Wario from Nintendo’s video game franchise “Tennis Mario.” The funniest costume went to a student dressed as a dripped-out life-size Munchen Ramen Noodle Soup. The most creative went to an infected green zombie, and the scariest went to a terrifying nightmarish Grim Reaper.

The winner of the tournament, fourth-year student Steven Hickman, said he enjoyed the event and praised the Super Smash Otters Club for the events they do on campus.

“This was really fun. I love playing Smash and every time a Smash tournament is hosted on campus I am the first one there,” said Hickman. “I have been here since my freshman year when the first esports team started and I just have been coming back year after year with a new set of people every week and it’s a wonderful group of people and gaming community.”

Before the event started, the room that was originally expected to be used wouldn’t open, causing frustration and panic among the club officers. They called security but were not able to open the room as a staff member had to be present to do so. In search of finding alternatives, they found a small room open and located in the library where they decided to throw the event.

Second-year Super Smash Otters Club President Micah Rodriguez believed that despite the setback and delay, the new location enhanced the experience of the event much more.

“The environment for the event was actually very nice. I love getting to talk to people because the closure and lack of open space really made it feel personal. It was almost as if everyone was together at a party having a good time,” said Rodriguez. “Somehow the event still managed to go really well.

“Last year we hit $1,040, and while we didn’t hit that goal this year, I am still glad we raised a lot of money for breast cancer.”

A look into a sustainable operations environment

Students saw what it means and what goes into having a sustainable operation when the Hospitality Club and the Sustainable Food and Beverage Management...
Read more
Clubs

As Halloween and the spooky season end, Día de los Muertos approaches and celebrates the life of those who have departed. On Oct. 28, the...
Read more
Clubs