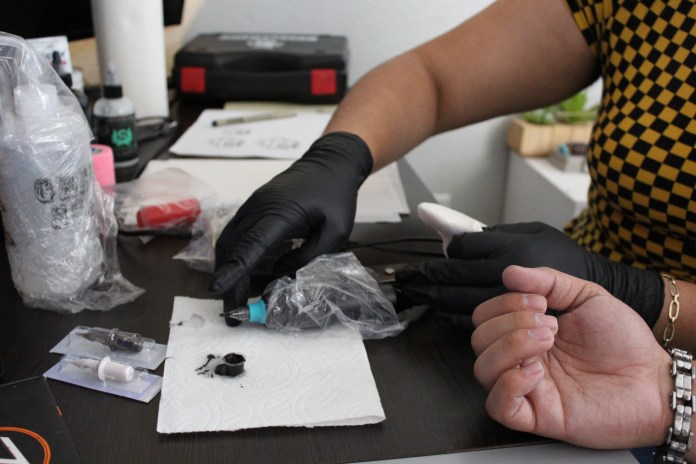 Janette Amezcua (Jay) is a fourth-year student at California State University, Monterey Bay (CSUMB) who does tattoos out of her bedroom, where she has been perfecting her craft.

Her interests in tattooing began while she was in high school. She always enjoyed freehand drawing on her friends with sharpies and pens, but later bought a tattoo kit when she was 19.

Every tattoo artist has their own style. Amezcua found she liked the traditional and neo-traditional tattoo styles for their format, boldness and limited colors.

“I’m not a fan of too many colors,” she explained. “I’ve always liked just black and white and neo traditional stuff. I could definitely make it my own with my art style.”

For many student artists out there, it can be difficult to balance their creativity with school work. They can both be mentally draining and time consuming. Amezcua has found a good balance between her art and school work.

“I see my tattoo work not so much as a job, [but] more as a hobby. When it comes to balancing my life, you always want to leave room for the things you like doing and take care of yourself. Tattooing and art in general is one of the ways I do that. Even when I’m stressing out with classes or studying for an exam, I’m always just doodling to get my mind off of it and tattoos definitely help with that.”

Amezcua is majoring in collaborative human health services with a concentration in social work and a minor in psychology. While social work and tattooing are seen as radically different to many people, Amezcua has found a unique correlation between the two in a bigger picture that others may not.

“I think one of the most inspiring things that I always try to remind myself of is that social workers have their jobs, which is to help their community. I’ve learned there’s different ways people express how they feel. I can understand people from where they’re coming from and that art is the way people express themselves.”

In Latinx culture, tattoos of any kind have historically been seen in a negative way, especially in the eyes of older generations.

“It was a challenge coming from a Hispanic mom. It wasn’t the greatest when I told her I was interested in tattoos, just because there’s a lot of stigma behind the tattoos and a lot of negative representation with them. My parents were definitely raised traditionally so they always think there’s a negative affiliation. But I’ve been trying to get them [out of] that mindset because they see my work and appreciate my art so that’s what’s been helping them get a little more comfortable with the idea that tattooing is something I want to do in the long run.”

Regardless of the various challenges she has faced, Amezcua continues to strive and prosper, keeping a positive mindset as she grows.

Amezcua left off with one final piece of advice. “As cheesy as it sounds, just follow your talents.”

She observed a lot of people who stray away from their talents for something that could make more money or is a serious major in college. “And I mean shit, look at me. I’m over here pursuing tattoos as well as a bachelor’s in social work.”