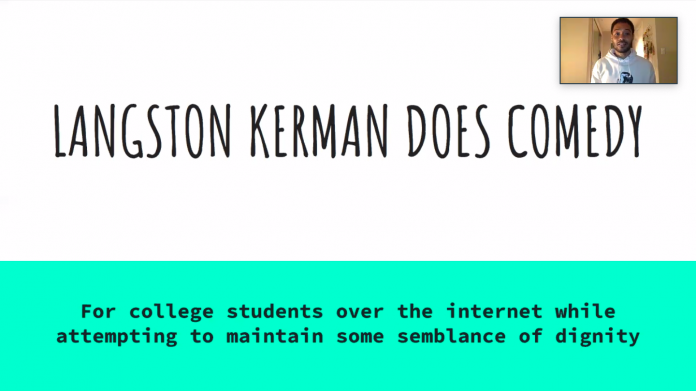 On April 24, comedian Langston Kerman held a comedy presentation and question and answer session over Zoom, exclusive to the California State University, Monterey Bay community. Kerman is also an actor and writer, best known for his role on the HBO show “Insecure.” He talked about the woes of quarantine, married life and his experience with comedy in the hour-long experience.

For the bulk of his time, Kerman gave a modified standup routine, accompanied by a screen-shared slide deck. He was not a fan of the format.

“I, like many of us, have become quite uncomfortable with the Zoom era,” Kerman said. To ease the tension, he occasionally played sound effects off of his phone during the awkward silences.

When contemplating what makes him happy, Kerman spoke at length about his wife. While he loves being married, he bashed the process of getting married, which he described as an excessively stupid and expensive decision.

“This is a picture of her on the day I asked her to marry me. She was obviously deeply in love and had the best time of her life,” Kerman said, while displaying a picture of his wife in hysterics.

“It’s a lonely time, it’s a difficult time,” Kerman said on the subject of quarantine. He then shared the top five things he misses about life before the country went on lockdown.

The list included breathing in wind, the natural passing of time and “feeling socially awkward at a friend’s house … that uncomfortable energy you used to feel with someone you were only semi-close to.”

Kerman highlighted the sadness of our society collectively running out of media to consume, reminiscing about the days where he didn’t have to know the personalities featured in “Tiger King.”

Kerman ended the routine on life advice, which ranged from heartfelt to ominously specific, such as the warning that eating Applebee’s everyday will ward people away from you. He also shared that chocolate cheerios exist and “if you haven’t had chocolate cheerios [yet], you can’t give up.”

The audience was then able to submit questions for Kerman to answer. When asked how he comes to write bits while in quarantine, Kerman said, “[I’m] just trying to think about things that are a little more close to the heart. It’s figuring ways to explore inward and then project that outward.”

His journey with comedy and entertainment began in his mom’s basement, where he lived after graduating while pursuing stand up.

“I went into a local bar in my neighborhood and I bombed every week, over and over again, until I started to get tepid laughter. Somehow, in that, I kept wanting to show back up,” Kerman said.

Kerman shared his fondness for working on the shows “South Side” and “Insecure.” For the latter, “The character I got to play, Jared, was a really cool thing … we got to talk about a bunch of complex relationships and sexual identity and gender roles, and a lot of things that weren’t necessarily big conversations in the black community,” Kerman said.

Kerman announced that the next season of “South Side” is on the way, with the writing done as of last Friday. “Shoots require a lot of people to be in tight spaces, but once that is allowed again, there will be ‘South Side’ season two,” Kerman said.

Story by Edgardo Sanchez “The Devil is a Part Timer” is a slice of life/fantasy anime about the Devil, ‘Satan,’ having lost his world and...
Read more
Entertainment

“The Woman King,” directed by Gina Prince-Bythewood, was inspired by the actual events of the all-women warriors in the 1800s that protected the African...
Read more