“Let’s Talk About The Border” 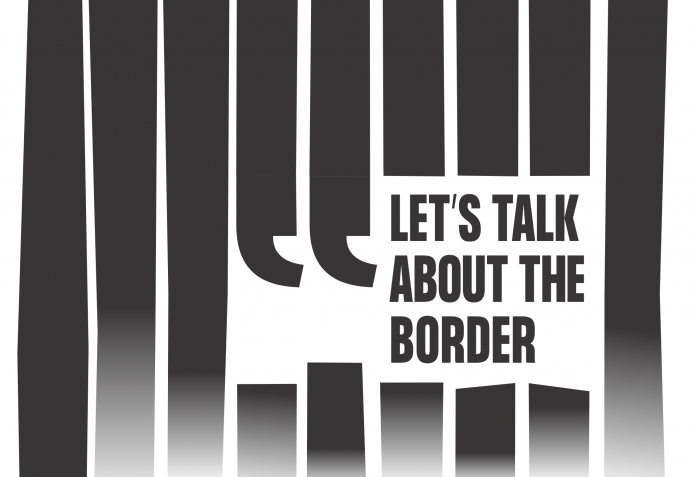 During the presentation led by Dr. Judith Flores Carmona and Dr. Cynthia Bejarano, both CSUMB alumna, issues such as violence, kidnappings and advocacy for migrant families were highlighted. Dr. Flores Carmona and Dr. Bejarano lecture at New Mexico State University in Las Cruces, New Mexico, and they hope to inspire people to continue researching border town issues and promote awareness of human rights negligence seen living in or near border towns often not reported by the news.

Carmona, a first-generation college student, migrated to the United States from Veracruz, Mexico when she was 11. Having been admitted to CSUMB with the help of Cecilia Burciaga, she was able to pursue her passions of becoming a college-educated Latina. While at CSUMB, she took HCOM’s Latina Life Stories course which she described as life-changing, giving her relatable reading material concentrating on Latina issues never before seen in literature or taught throughout her academic career.

Carmona credits “Telling to Live: Latina Feminist Testimonios” by Celia Alvarez and “Borderlands/ La Frontera” by Gloria Anzaldua as influential, inspirational and necessary to understanding cultures outside of our own. In fact, Carmona has established a Latina feminism class at New Mexico State that showcases Latina testimonials and continues to allow other Latina womxn to access higher grounds of personal and academic achievements through sharing their testimonios.

Since leaving CSUMB, she has published three books and dozens of articles referencing Latina feminism and advocates equality. She brought up the important message of “Everyone can teach you something, everyone can learn something. You are not the only one with knowledge.”

Bejarano, a fourth-generation Mexican-American, grew up living in border towns her whole life. With 20 years of teaching experience at New Mexico State, she fights for human rights policies for migrant families, farmers, and works extensively on providing justice for missing and murdered girls in Ciudad Juarez, Chihuahua, Mexico.

During her presentation, she displayed images of displaced migrant families in Juarez and Tijuana, Mexico due to the border wall being built under the presidency of Donald Trump. The families, not being able to access their homelands now, have created what are known as “tent cities” and get little to no recognition by the news media. Bejarano talked about the price to build a small portion of the wall: $13 million of taxpayer money. Her presentation demonstrated constitution free zones which allow border patrol agents to demand papers from any immigrant and raid their homes without warrants or permissions. Many do not know that Monterey County and its surrounding cities fall into the constitution-free zone.

Bejarano’s work surrounds the murders of Maria Sagrario Gonzalez Flores and Isabel Cabanillas de la Torre, including thousands of other women, supported by the help of “Amigos de las Mujeres de Juarez’,” an organization that fights to bring justice to the victim’s families. With the iron being used on the border wall, and the constant presence of the U.S National Guard, she invites the public to remember that border towns “should not be romanticized, but are full of beautiful deserts and not all violence.”

“Immigration will take decades to resolve. History repeats itself, and I think that is what we are seeing,” Bejarano said. “The perpetuation of racialized violence that translates into justification for further security, and border security is inflated with United States National Guard, everything builds on one another to create a rhetoric and argument for further enforcement towards people of color, particularly immigrants.”

When talking about issues facing border towns, many people had not heard about the Walmart shooting in El Paso, Texas that happened on Aug. 3, 2019 – a domestic terrorist attack orchestrated by Patrick Crusius that killed 22 Mexicans and injured 24 others.

With constant debates on immigration issues, and Trump’s declarations of deportations, it is not hard to imagine why the visit was not welcomed. All of the images shown during Bejarano’s presentation were taken three days after the Walmart shooting and depict the perseverance of the Mexican people and community.

“I would like people to learn what is going on in the borderlands region, and the purpose of the rhetoric that surrounds the immigration issues and the people who are affected,” Carmona said. “Coming from the borderlands region of El Paso, Las Cruces, and Juarez, we realize there are a lot of stereotypes that are circulating our region, especially after the mass shooting, and I think people are unaware of the consequences from the discourse that has been acting as an approval for white supremacists.”

Talking about the border and border town issues helps immigrants and communities fight against unjust racism, allows for the discussion of equality, shows contradictions exposed at the border, and forms allegiances to replace hate. The United States-Mexico border is one of resilience, honor and beauty – not all violence.

Due to recent events of Iranians and their education systems having an impact on world peace,  state department official Andrew Loomis and local novelist...
Read more
Government & Politics

Submitted by Oscar Daniel Jimenez Iniguez / Community Journalism On Nov. 8, Califirnians will decide who wins seats in the House of Representatives and the...
Read more
Government & Politics

Submitted by Catalina Villegas / Community Journalism  The upcoming 2022 election poses a critical upswing in state funding to the arts and music programs in...
Read more