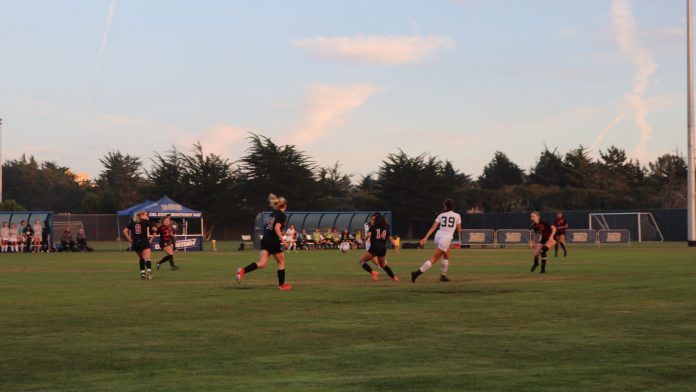 The CSUMB soccer team came out victorious and wowed the crowd. Prior to this game, Otters had a winning streak of two games, now making them undefeated in the third, as well.

After many failed attempts of scoring, the wolverines resorted to outbursts of frustration. Within the first half, tensions were high between the two teams. Otters came exceedingly close to scoring goals thrice in the first half, but Wolverine goalie Alex Qualls would not let the ball in.

By the end of the first half, the score was tied 0-0. There were twelve fouls committed by the Lady Wolves to the Otters, as both teams struggled to make a goal.

The second half continued with the scores tied, although CSUMB senior Alyson Schade, 7, came close to scoring against Wolverines. With neither team still scoring a goal, the game went into overtime.

Within less than three minutes into overtime, Lia Kilgore Oyere, 16, scored the winning goal. In the end, the score was 1-0, securing Otters in place for a successful season.