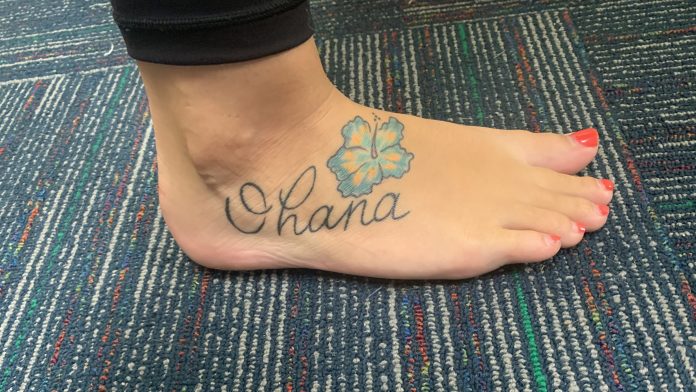 In today’s society, body modifications such as piercings and tattoos have become widely popular and more accepted. Approximately 36 percent of American adults between the ages of 18 to 29 have at least one tattoo, according to a 2006 study conducted by the Journal of the American Academy of Dermatology, and more people are continuing to get inked. Every tattoo has a story, whether it’s something just for fun or if there is a deeper meaning behind it.

Freshman Keaton Engleman currently has two tattoos. She got both of them during a trip to Hawaii with her family when she was 17 years old.

“The one on my foot [says] ‘Ohana,’ with a hibiscus flower, [which] means family in Hawaiian and my mom has a matching one and my sister will get it later on. It basically is just a way to show that our family bond it forever,” explained Engleman.

“The other one is on my ribs and it is ‘eum amamus idem’ and is Latin for ‘still we love it.’ I got that phrase because my Latin teacher for all four years of my high school would always say ‘such is life, still we love it.’ My best friend got the first part of the phrase,” she continued.

Both of her tattoos, one being on her foot and the other on her ribs, are placed in areas that are generally considered to be more painful and sensitive to the tattooing process. However, this wasn’t the case for Engleman.

“It wasn’t bad, honestly the foot didn’t hurt at all and the ribs didn’t even hurt it was just slightly uncomfortable because I couldn’t see what was getting done,” she said.

For many of us with tattoos, it can be exciting to think about what tattoo ideas we want to get inked and start planning for future tattoos.

Engleman also shares this excitement, as she said, “I do have one more planned at the moment and that is a matching tattoo with my sister. Other than that, I’m not sure what else I want to get. I just know that I want to get more tattoos.”

Those contemplating getting their first tattoo may want to reach out to someone who already has tattoos for advice.

“I would just say be really sure about what you are planning on getting and think it through. Also don’t let the pain scare you away from getting one, it’s not as bad as you are probably expecting,” advised Engleman.