Shuttle helps East Campus commute, but its not perfect 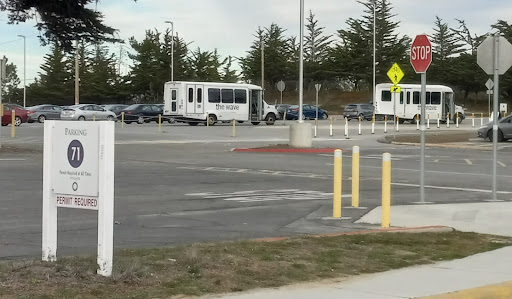 Story and photos by Raquel Spaulding

The California State University Monterey Bay (CSUMB) shuttle, The Wave, stops in Lot 71 and students that commute to and from East Campus are concerned.

The reasonably new CSUMB shuttle service began on Jan. 21 and is an addition to the Monterey-Salinas Transit, which was the primary source of campus public transportation in the past.

Many East Campus residents rely on the CSUMB shuttle, even if they have a car, because it’s free and saves time in finding a parking spot.

The Wave’s shuttle route to and from East Campus has only one stop at the main campus, but it’s off the main campus, in Lot 71 (near the Visual Arts C building), which is unsatisfactory for some students, despite being described as “a short walk from Main Campus” on the CSUMB website. Lot 71 is away from the central common areas such as the Dining Commons and the library.

The Lot 71 stop does not have a protective structure and students waiting for The Wave are exposed to the elements, including rain and heavy winds. There is traffic throughout the parking lot and the area at night is lit only by the street lights.

“It’s a long walk to the bus [stop] and it is cold,” said Khushi Sharma, a fourth-year. Sharma went on to say a shuttle stop on the main campus would be “safer, as it’s closer to students and classes.” Sharma echoes the primary concerns of the students riding the shuttle.

Transportation Programs Manager Sloan Thomas Campi, who took his position at CSUMB in July, said he is working on making the course more efficient.

“In Lot 71, one of the short-term safety measures I can confirm [is] that I am working with the Facilities Department to implement a temporary bus lane, which should be installed later this semester, barring any major impediments, to at least allow the bus to operate out of traffic while creating a pedestrian island. I hypothesize that this will be the only measure that will need to be implemented for The Wave to better serve students,” said Campi. Campi expressed that student concerns are valid and would also be interested in hearing from the students about this to get valuable feedback. The Fall Travel Survey is one way Campi collects data, though it is not particular to The Wave alone. Another method for students to reach out to him is by sending an email to [email protected]