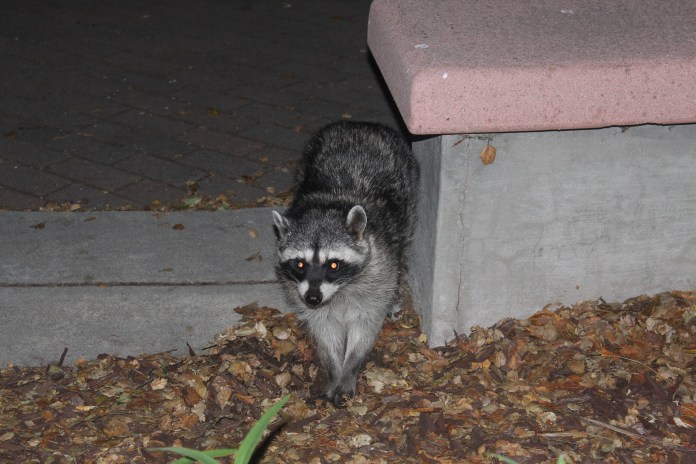 Here at California State University Monterey Bay (CSUMB), wildlife freely roams across campus during all hours of the day and night. You may see the common squirrel climbing up a tree, a deer frolicking through the grass and even an owl soaring through the night  sky hooting away. However, one critter that is all too common is the devious raccoon.

They can be seen rummaging through campus trash cans and dumpsters late at night in search of a meal. Raccoons nocturnal mammals that will most

likely be found wreaking havoc once the sun goes down.

On campus, raccoons have an infamous reputation as a handful of innocent and oblivious students who have been victims of their late-night jumpscares. However, despite how mischievous they may act, raccoons are actually beloved by many. They are at the end of the day adorable animals with cool-looking mask-like faces and tails.

Nevertheless, don’t let this fool you as raccoons have the largest risk of endangering human health. Raccoons along with foxes, skunks, and bats are the most common creatures that carry rabies, with the United States reporting that 90% of animal rabies cases come from wildlife according to the Centers for Disease Control and Prevention.

Rabies is a virus that infects

central nervous system and spreads to the brain. The symptoms of the virus can include but are not limited to hallucinations, delirium, insomnia, aggression and hydrophobia.

A human can be infected by rabies either by being bitten, scratched, or exposed to the saliva by rabies-infected animals. If the virus is not medically treated for humans as soon as possible, it has a 100% death rate.

If you see raccoons, it is best to leave them be and avoid physical contact with them at all times. Raccoons are typically friendly animals as they will not bother you if you do not bother them.

However, if you happen to be bitten, scratched or exposed to the saliva of a raccoon, immediately go to the hospital and seek medical attention. If a raccoon or any animal on campus is exhibiting unusual and aggressive behavior, report it to campus police at 831-655-0268. In the event of an emergency call 911.