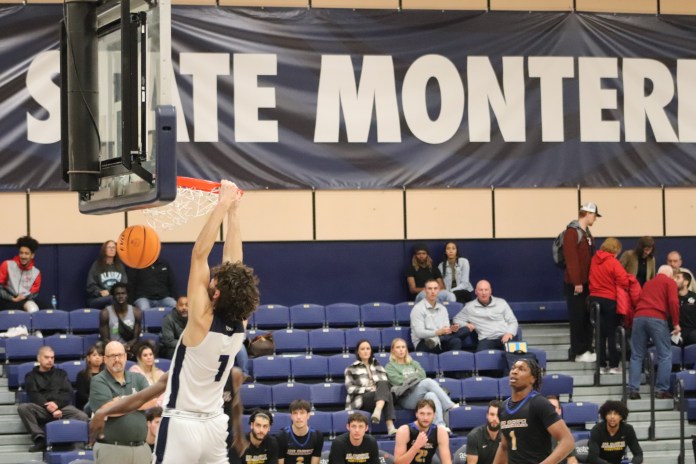 Basketball season has begun, and the California State University Monterey Bay (CSUMB) men’s team is off to a good start, winning their opener 77-57 against Central Washington University on Nov. 11. Although they lost the final round of the GNAC/CCAA Challenge the next day to Western Oregon 80-77, they were able to cut into a 13-point lead after halftime.

While they currently are ranked 10th in the NCAA Division II Western region, their performance makes the rest of the season look optimistic.

The Otters hosted their first home tournament of the season, The Otter Invitational, on Nov. 18-19 and gathered a crowd at the Kelp Bed with over 150 spectators. Their first game against the University of Alaska Fairbanks was a nail-biter with 14 lead changes, but CSUMB came out on top, winning 80-77 after falling behind by one point with two minutes left in the game.

According to assistant coach John Seavey, “When you lose a lead like that, it’s easy to fracture, but if we continue to do what we practiced all week, the results will take care of themselves.” He said that in order to prepare for the tournament, the team was practicing an aggressive offense and making sure to go for shots they wanted to take, not the ones the other team forced them to.

The Otters ran a man-to-man defense and out-rebounded their opponents, but Seavey and Joe Wall (#55) agreed the team needs to work on their defensive strategy. Wall is an outstanding asset for the team and he raked in 25 points and 10 rebounds.

The following night, the Otters played against Colorado School of Mines, losing 86-77, but CSUMB’s point guards made a commendable effort. Jailen Nelson (#10) scored 10 points and had two rebounds and steals. Jordan Archi (#11) also had two rebounds, two assists and scored 21 points, nine of his baskets being three-pointers. While this game wasn’t the end of the tournament the Otters hoped for, their record thus far leads to high expectations.

Story and photos by Max Guerrera On Saturday, Nov. 26, the Otters played a home game against San Francisco State, losing 55-60. It was the...
Read more