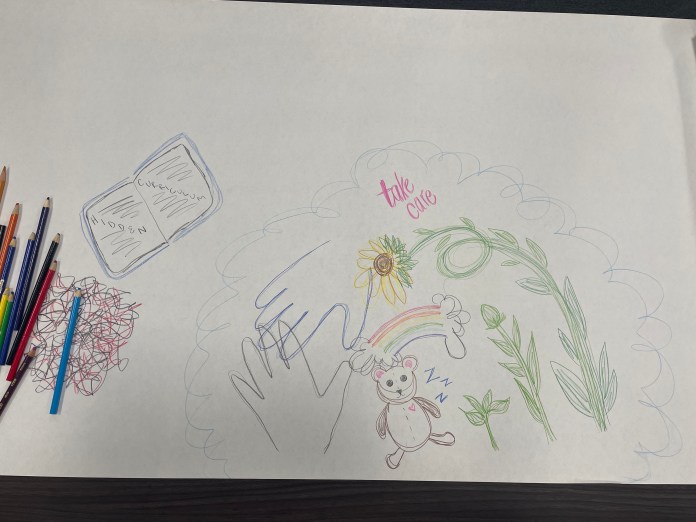 Story and photos by Andrea Valadez-Angulo

While the shared views and theories were spoken of with immense passion, the event was mellowed by the opportunity for attendees to draw freely.

Through this act, the ADLC wanted to “encourage a space of true connection with one another,” said Megan Matthews, a member of the club. “We want people to think and exist freely.”

The hour-and-a-half-long conversation centered around the ADLC’s belief that life under capitalism leads to complete alienation from nature, community and even alienation from oneself.

“We don’t hate doing labor… we hate being forced to do it to survive while someone else is profiting off it,” explained ADLC officer Amelia Bennett.

According to Bennett, “all work under capitalism is inherently exploitative.” The group believes you are still being exploited even if you work for a wage. “A wage doesn’t replace the ownership of my labor,” said fourth-year ADLC secretary Dana O’Donnell.

While capitalism is the norm in our country, the ADLC does not want to be boxed into capitalistic standards. They also want students to feel free to come to their meetings and learn about the system they’ve grown up in and share their own experiences. “Everyone brings knowledge to the table,” said O’Donnell.

This kind of alienation also affects students, explained Bennett. She believes students tend to feel detached from their classes because of the capitalistic idea that you need to constantly be working and creating something to be seen as valuable.

The workshop also touched on the ADLC’s belief that instead of the punitive justice model the U.S. currently adopts, the public would be better served by a more restorative model that prevents harm from happening in the first place.

“We don’t think of it as we’re gonna abolish police and prisons… we think that too much money is being invested in oppressive solutions to problems that could be solved through investment in community wellness,” said O’Donnell.

O’Donnell also explained that “abolition is a political vision that doesn’t see the settler colonial carceral state [police, prison, surveillance] as necessary features of society.” She went on to clarify that “obviously we’re not so naive to think that violence or social harm would completely disappear, but that there are much more productive ways to deal with it than a guy showing up with a gun. That typically just escalates violence.”

“If our goal is to change things, we need to challenge the logic of the way the system is set up.” O’Donnell expressed her belief that “a community can, in fact, provide what it needs if we have the will and collective consciousness to do so.”

“We can’t wait for the state to make changes… we can and need to start building the world we want to see right now.”

Along with various workshops like this one, the ADLC also hosts a weekly radio show through Otter Media called “Abolition Now” that plays every Wednesday at noon.