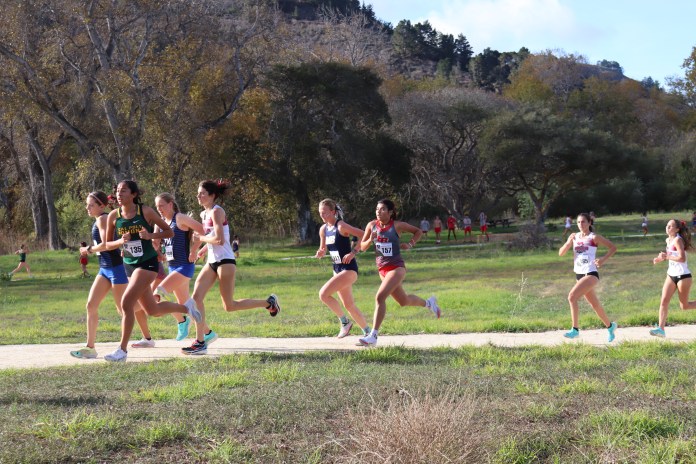 “I tend to kind of just go into it with positive thoughts like ‘I can do this, this is happening,’” Irvine says. “I try not to think too much about it until I am on the line getting ready to go … I really just stay positive and happy.”

For much of the season, the positive thinking has seemed to work. As earlier on Oct. 1, she earned her first collegiate win covering a 6K course in 22 minutes, 58.0 seconds at the Waves International, which led to California State University Monterey Bay (CSUMB) taking second place, marking the first time since 2015 an Otter has taken the top honors at an Invitational.

Her first victory stacked with her already impressive breakout season thus far has proved Irvine is a key component and aspect of CSUMB’s cross-country team success.

At the Waves International, she started the race off by getting a feel for how fast her competition was going, placing quickness as a key to how she ran and started.

“I went off pretty fast to start the race, and typically that’s how I run. I go fast or start out fast but I always kind of go off how it feels,” she said. “Most of the time I am not really thinking, but in the beginning of the race, it’s a little bit of a push per se, just trying to feel out where my legs are.

“Starting off I said to myself ‘oh they’re really fast, OK that’s fine, we are going to go with this.’”

Immediately after her race, she felt a sense of relief knowing she had accomplished something great on account of her own will and determination.

“I felt relieved that I finished that course. The hills were tough. I was very happy and surprised even though I shouldn’t be surprised because I have been working so hard,” said Irvine.

Feeling extremely proud of herself and her performance, Irvine reflected on what the win meant to her not only as a student-athlete but as a person with goals and aspirations.

“Crossing the finish line was like ‘Oh, I ran this whole race, I really hope I get through the whole thing,’ which I did,” she said. “I was very happy and just overall felt a sense of relief and proud for how far I have come in running throughout my life and what led to that moment.”

Irvine was not only proud of herself, but also in her teammates and coaches who mutually felt the same way. They continue to support her throughout her time at CSUMB and Irvine does not take that for granted.

“I was super proud of my teammates. They did amazing and after a while, someone figured out that I got first and they all were really proud of me and really happy,” she said. “Everyone was overjoyed as we were all equally happy for each other and coach was really proud.”

Those same feelings of pride extend to Irvine’s younger sisters, who she describes as her role models that inspire her on all of her runs.

“My two sisters Alex and Beth, who are both younger than me, are my biggest role models and are people who I look up to the most because of how strong they are individually and how hard they work toward their own goals and that helps push me throughout my races. They help push me through the tougher times of a race.”

As Irvine continues her athletic and academic career at CSUMB, she hopes to continue doing her best no matter what.

“I want to continue to work hard and push myself to see what I can do. My goals are to work with my team because we have a great family of students,” said Irvine. “I want to try and do my best by giving it all I have every day. Even if it is not the best, at least it is my best.”

Irvine is continuing to do her best and be a standout team member. On Oct. 16, she beat her record at the Bronco Invitational by running a 21:58.5, marking it as the 16th fastest 6K in CSUMB history.

Irvine and the rest of the women’s cross country team will be traveling to Montana on Nov. 19 for the NCAA West Regional Championship.

Story and photos by Max Guerrera On Saturday, Nov. 26, the Otters played a home game against San Francisco State, losing 55-60. It was the...
Read more