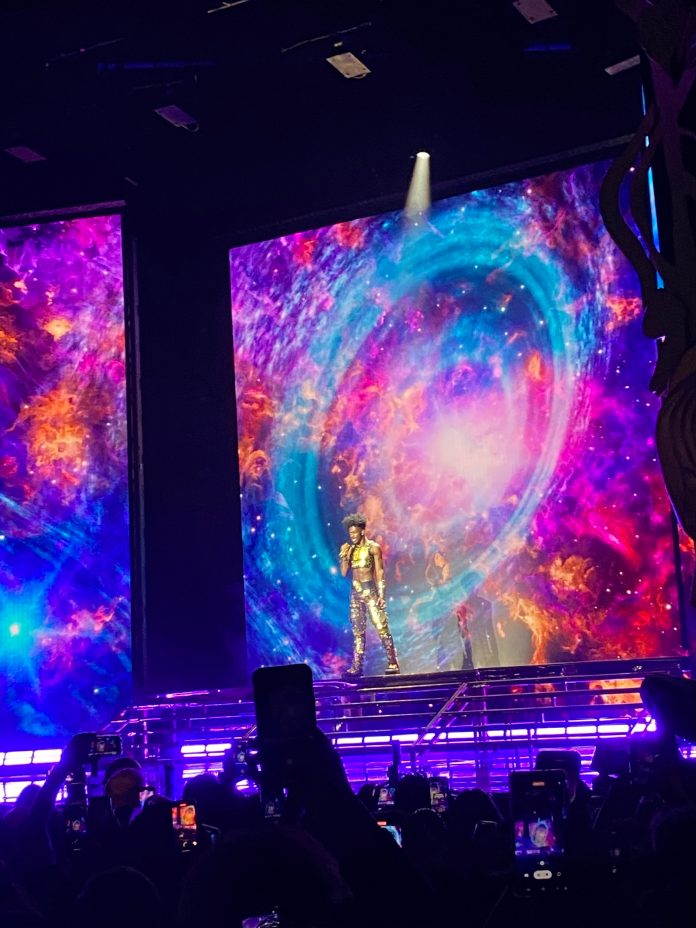 The singer enthralled the audience at the Bill Graham Civic Auditorium in San Francisco, performing songs from his debut album Montero, including chart-topping singles such as “Industry Baby” and an unreleased song called “Down Souf Hoes.”

Lil Nas X’s claim to fame was the single “Old Town Road,” which was released independently in 2018 and topped the charts at No. 1 the following year. Since then, he has proven himself to be more than a one-hit wonder with two more hit singles at the top of the charts.

Although he’s a self-proclaimed pop star, part of the appeal of his music is his ability to blend genres such as rap, pop and country. After coming out as gay in 2019, he has become one of this generation’s most iconic black LGBTQ+ stars, expressing his identity through his artwork with lyrics and gender-bending costumes. As most of his career has been during the pandemic, his very first tour has been highly anticipated by fans.

Lil Nas X gave an enthusiastic performance for the Long Live Montero Tour. The set was decorated in a gold frame with carvings of butterflies and Lil Nas X himself. He incorporated props such as a giant glowing egg and a life-sized horse. Each song was choreographed and some of the dancers can be recognized from his music videos.

The setlist was divided into three acts and an encore. The title of each action was projected on the red curtains as the crowd waited eagerly. The concert followed a storyline with a skit between each act to conceptualize their meanings with the songs they contained. Lil Nas X played off the accusations he’s gotten from religious groups and incorporated themes of Heaven, Hell and cults into his show.

Each act represented a stage in his journey, starting with older or more heartfelt songs such as “Old Town Road” and “Sun Goes Down” for Act I: Rebirth. From the start, Nas X did not fall short of extravagance. For the show’s first song, he appeared on stage wearing a metallic gold suit reminiscent of his 2021 Met Gala outfit and brought a giant golden horse on stage for his performance of “Old Town Road.”

Act II: Transformation was even more energetic than the last with songs such as “Dead Right Now” and “That’s What I Want.” The visuals of the set changed with each theme, and there were multiple costume changes, one of the most memorable being a pink enlightenment era suit.

During Act III: Becoming, he sang his most sensational hits, such as “Montero (Call Me By Your Name).” His live performance of “Industry Baby” in the last act paid homage to the music video with visuals of a locker room and gym behind him and his dancers, who were wearing glittery pink football uniforms for costumes. At the end of the song, butterfly-shaped confetti blasted throughout the auditorium and when he left the stage, the crowd began chanting, “One more song!” until he returned for an encore and ended the night with his new single, “Star Walkin.’”

One of the show’s most memorable elements was Lil Nas X’s personality and magnetic stage presence. The show was fast-paced, but this didn’t stop Nas X from connecting with the audience. From pulling fans on stage and dancing with them to getting the entire crowd to sing the “American Dad” theme song, Lil Nas X made sure that the last night of the American leg of the Long Live Montero Tour was a night fans would never forget.

“I only mention it 'cause it was such a scene, and I felt seen.”  Those are the lyrics heard on the first track of Lana...
Read more