East Campus celebrates with a Trunk-or-Treat 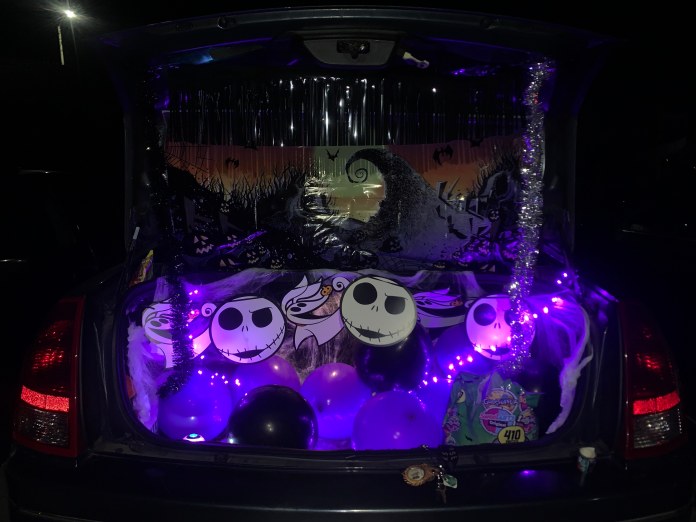 Story and photos by Dee Davila

On Friday Oct. 28, residents of East Campus gathered on Wilderness Court to welcome the Halloween season with the yearly tradition of Trunk-or-Treat.

Trunk-or-Treat is a different and modern take on trick-or-treating. The basic premise is to decorate the trunk of a car in such a way that it creates a miniature booth, typically featuring a singular theme. Multiple cars participate in the event, providing children and Halloween fans a compact trick-or-treating experience.

East Campus Resident Advisor (RA) Hannah Paige said “we knew we were going to be hosting it once everyone was hired for the RA positions.”

The event was attended by roughly 200 students and staff members, with about 12 cars participating in the main attraction. Among the many decorated trunks were other activities for participants and attendees, such as a cornhole, music, lights, food and beverages.

The trunks on display were arranged at the end of a court near the park with a wide array of themes, featuring everything from the film series “Twilight” to Pottsifeld from the animated series “Over the Garden Wall.”

Fourth-year Carlie Garcia drew inspiration for her trunk-or-treat booth from the character Lightning McQueen from the Pixar film “Cars.” Her booth featured a wide array of racing paraphernalia and decorations to simulate the excitement of an actual race track. Garcia said “it only made sense to go with Lightning McQueen since I have a red car.”

Masters student Jacqueline Taueetia enthusiastically shared her “Jurassic Park” themed booth. Her booth featured moss locally gathered from the nearby park, fog, a strobe light and an actual radio from the 1980s to recreate the environment of “Jurassic Park” from the trunk of her car.

The Multicultural Greek Council and Otter Media made it out to the event as well with their own trunks to display.The booths were particularly welcoming to the children of fellow students and staff who were trick-or-treating from booth to booth as they filled their bags with all sorts of sweets.

“I would definitely consider this event a success,” said Paige. “Many people personally said thank you for holding the event and  we had lots of people come. I believe it was around 200 people who showed up.”