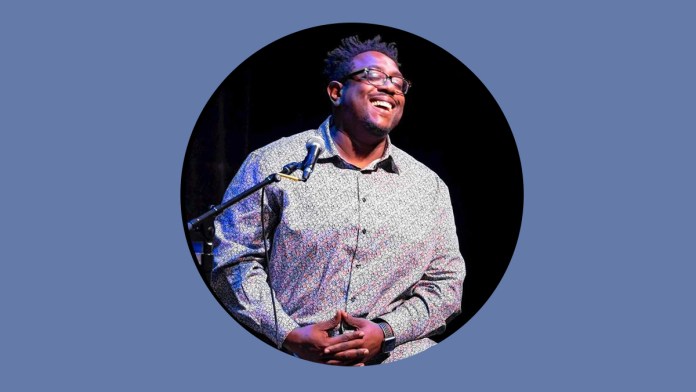 “New Orleans is one of the most challenged cities,” Vaughan said. “When we talk about economics, politics and such.”

Vaughan, similar to Cameron, has family roots in New Orleans, which prompted Vaughan to inquire about his upbringing and inspirations.

“In school, I was in the performing arts program,” Cameron said. “I had some teachers that saw I had exceptional skills.”

Cameron credits his Baptist Church background and parents singing around the house for his musical knowledge and interest. At 7 years old, Cameron was receiving private instruction to advance his lyrical abilities, however his talent in performing comes from his own natural skill and connection to the city.

“Being from New Orleans is a cultural art lesson in itself,” Cameron said.

Vaughan showed the audience one of Cameron’s songs called “The 504,” demonstrating the smooth, funky tunes Cameron produces. “The 504,” pays homage to his hometown, but also describes the struggles facing the streets and community.

Because the music scene was interrupted by the coronavirus pandemic, Cameron is currently soaking up quality time with family. After spending two years on the road with his band “Tank and the Bangas,” incorporating downtime with loved ones is something necessary and missed by Cameron.

Touring might not be in the foreseeable future, however Cameron remains optimistic by still creating music in the safety and comfort of his home. “Music is where you can express yourself,” Cameron said. “I think that’s where people can look inside themselves and receive what they need.”

Since personal gatherings are restricted, Cameron informed the audience that listening to music allows for cultural connection when the community can’t celebrate together. Reminiscing on his past tour experiences, Cameron explained that his opportunities to explore countries like Austria, Finland and Germany have opened his eyes to the global Black population.

“There are beautiful Black people everywhere,” Cameron said. “It was encouraging to see these Black folks living freely and enjoying themselves, but also creating and owning businesses.”

The discussion concluded with Cameron reminding the audience that knowing who you are is “an ongoing thing,” but is essential to making successful and introspective decisions. Having a community of blood family and friends, he states as “finding your village.” Making the best of things, staying open to new ideas and putting your trust and faith in opportunities is where the creative process starts.