The Wrangler is mighty, but so is the Land Rover Discovery 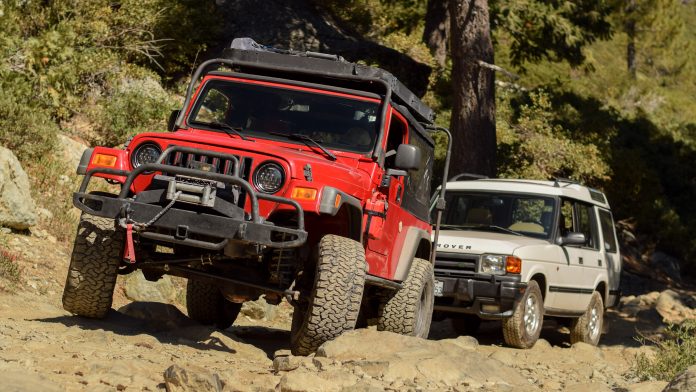 Forever mortalized by pop stars and off-road enthusiasts is the Jeep Wrangler. The Wrangler was inspired by the Willys “Quad” Jeep created for the US military in the 1940’s. They were incredibly lightweight and equally capable, but were about as comfortable as the wars they were built to fight in.

Despite that, Jeep noticed a surprising amount of GI’s driving the Willys Jeeps around after the war was over. It told them one thing: Americans wanted something that can handle the wild, especially after civilians became interested in the ability to traverse the American countryside. After some careful thought, minor design changes, and a few decades of trial and error, the Wrangler was born in 1986 – every model before that was simply a prelude to the Wrangler.

The Wrangler I’ll be writing about is a 2006 Unlimited and it belongs to my uncle. This particular off-road animal is bred to handle the harsh and demanding deserts of Moab, and therefore, highly modified. With a four inch lift, taller tires and smaller wheels, heavy duty upper and lower control arms, upgraded suspension, updated heavy duty front and rear axles, and steel from and rear bumpers, it can handle just about anything. The engine is the standard four liter inline six of the day. Yes, the one that’s highly sought after when it made a name for itself for being indestructible.

It makes around 190 horsepower and 235 foot pounds of torque at 3,200 rotations per minute (rpm). With such a light car, even with the modifications, it’s the perfect recipe for rock crawling. Additionally, my uncle cleverly fit the Wrangler with front and rear locking differentials, making the list of things it can’t tackle even shorter.

As for the Land Rover Discovery, it was a vehicle that was built in the Wrangler’s shadow. First developed in 1989 (see, just three years after the Wrangler), it offered a much more comfortable, affordable and quietly luxurious off-road experience. It came with things that Wranglers didn’t: map holders near the sun visors with lights for them attached to the rear view mirror, a larger engine and comfortable back seats. It was designed for families that had a taste for exploration. For a long while, the Discovery was even used by the European police and military, due to their resilience, reliability and versatility.

The 1996 Discovery pictured for this article belongs to my fiance and I. It comes with the legendary four liter V8 making 188 horsepower and 250 foot pounds of torque at 2,600 rpm. So, right off the bat, the numbers don’t seem to be at all in the Land Rover’s favor. The Jeep, even with two cylinders less, makes more horsepower than my Landy. However, what matters in the world of off-road is the torque. The Discovery gets its first point in power figures, since it has more torque at a lower rpm. The engine doesn’t have to work as hard to generate the power needed to get over boulders. Though, despite the extra power, it’s limited in the sense that the Land Rover only has a center locking differential, no lockers like the Jeep. So, on paper, the Jeep should win. But, the Land Rover has surprised even me, so the figures don’t always mean anything.

Heading to Upper Sardine Lake at the Sierra Buttes, it started out fairly calm. As we pushed on, though, the terrain became a lot more treacherous. Boulders that threatened to pop tires off of the wheel bead were nearly unavoidable, and the difficulty of the obstacles rose with the incline. Even though the trail was only a little longer than half of one mile, it felt a lot longer. I stayed in 4Lo and locked the center differential the whole way up.

The Jeep ahead of me effortlessly bowled over the boulders, while I stayed behind, fearful for my undercarriage. Land Rover cleverly put the differentials toward the passenger side of the car, so the driver could take obstacles head on and fitted the Land Rover with over eight inches of ground clearance, but I was nervous. After all, getting any car off the trail in the event of an emergency would be a lot harder than I was prepared to handle.

At one point, I did end up scraping the undercarriage, due to my front tire slipping. Thankfully, nothing major was hit or even bent, but I did leave a scrape on a protruding boulder. Unsurprisingly, my uncle made it to the top first and his Jeep didn’t break a sweat. Having handled tougher trails in Moab made him just the right amount of confident – no scraping and no second guessing, he knew his Wrangler could do it.

On the way back, my front passenger tire lost traction and my rear driver tire was off the ground. Land Rover’s unique permanent four wheel drive system requires two wheels to be on the ground in order for the drive train to properly distribute the power. I had the equation right, but the front tire had no traction. I got out, put a rock in front of the tire and pushed onward. So, even though the terrain beckoned the hefty Land Rover to beach itself, it prevailed. Having only one circumstantial slip up under my belt, I’d say the bone stock Land Rover kept up amazingly well with the highly modified Jeep Wrangler.

Obviously, the Moab Wrangler may have been a little over qualified for the trail to Upper Sardine Lake, but it definitely showcased the Wrangler’s abilities. I would deem the Wrangler a winner since there was literally no incidents to report at all. It overcame anything my uncle asked it to. Though, the fact that my Land Rover kept up says a lot about the capabilities of the Discovery.