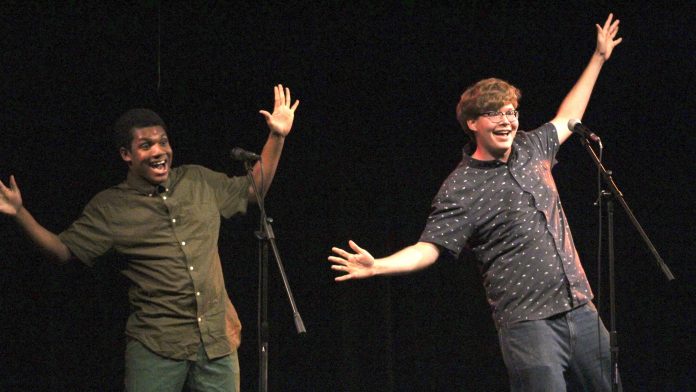 On Sept. 7, California State University, Monterey Bay (CSUMB) and the Residential Housing Association (RHA) hosted the first Open Mic Night of the Fall 2019 semester. The monthly event used to be held in the Student Center, but was moved to the Black Box Cabaret, where students performed on stage from 7 to 9 p.m. to a full house.

Fourth-year liberal studies major Sarah Leff opened the night with “Year 3000” by The Jonas Brothers, which proved to be a crowd-pleaser as everyone clapped and sang with her in unison. Leff has performed at every Open Mic Night since coming to CSUMB last year except for one, due to a “prior commitment.”

“I always struggle with picking songs because I want to make sure I’m not doing ones I’ve already done. I want to show I have a bigger repertoire than just my go-tos,” said Leff. “I literally pick my songs like five minutes before I go up, I have a lot of fun.”

Senior Philly Kash was the only comedian of the night, providing the audience with impressions of Michael Jackson, President Donald Trump and Ross from “Friends.” As a transfer student, this was Kash’s first performance at CSUMB, but he’ll “probably come back.”

Kash’s high-energy from being a preschool teacher translated through his performance, as he enjoys making people laugh and is willing to put himself out there to achieve that. “I expect mixed reactions, but I had a blast. Everyone else was amazing,” said Kash.

Julia Bozzo and Charlie performed “Fly Me To The Moon” by Frank Sinatra, followed by a cover of “Jungle” by Tash Sultana. Bozzo’s vocals and Charlie’s guitar-playing were memorable, not only for their chemistry on stage, but for their unorthodox coming-together, as well.

“We met in our history class on the Wednesday before Open Mic Night, and started talking about making music and what instruments we play,” explained Bozzo. “I told Charlie my main strength is singing and he said he’d been looking for a vocalist to play with for the Open Mic Night on Saturday. The rest is pretty much history!”

Story by Edgardo Sanchez “The Devil is a Part Timer” is a slice of life/fantasy anime about the Devil, ‘Satan,’ having lost his world and...
Read more
Entertainment

“The Woman King,” directed by Gina Prince-Bythewood, was inspired by the actual events of the all-women warriors in the 1800s that protected the African...
Read more