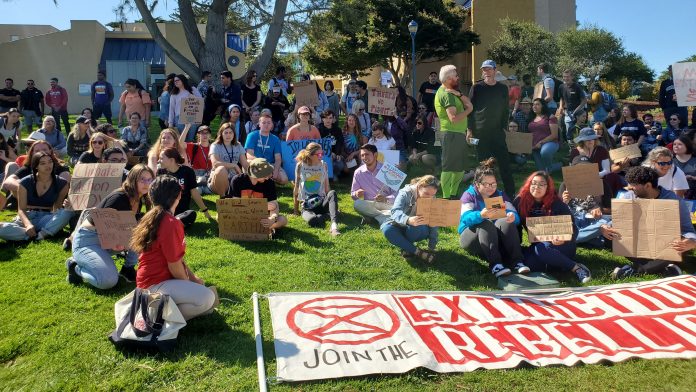 Staff, students and local activists met on the Main Quad lawn in front of the Student Center on Friday, Sept. 20 to protest and raise awareness about climate change. The event, held from 10:30 to 11:30 a.m., was California State University, Monterey Bay’s (CSUMB) show of support for an international climate strike.

The strike is an extension of the similarly-global FridaysForFuture movement, which have led student walkouts for climate change mitigation since August of 2018. In correspondence with the United Nations Climate Action Summit held on Sept. 23, a larger initiative was executed in over 150 countries, with another day of protest planned for Sept. 27. The youth-led mobilization sought additional participation from adults and unions in order to achieve its worldwide impact.

Dozens of CSUMB community members assembled, some brought their own signs. Event organizer and CSUMB alumna Carolyn Hinman brought materials for participants to make their own, as well. Organizers also provided resources for participants to write to representatives, lead chants and rallies, and facilitated group discussion on the subject at hand.

“I was an environmental science major when I was here, and I’m concerned about the state of our planet,” Hinman said. Her passion for the Earth inspired her to officiate the event. “I think it’s important to unify people … so hopefully, this is empowering,” she added.

Word spread quickly, through both word of mouth and social media.

“Our first-year seminar class is Intro to Environmental Communication, and our professor told us about the event,” said freshman Eunice Sosa. While many students attended as avid activists, just as many came as casual supporters.

“It was right before a class, and I was like, why not, I care about the environment … I’m going to show my support,” said freshman Charles Scrivner. “I learned a lot, especially from older people. It was really interesting to hear the perspective of boomers who are passionate about the environment. I just thought about different things I could do in my life to make a difference.”

Students were joined by several staff members, including Applied Environmental Science professor Dan Fernandez, who hosted a climate change movie viewing afterwards. Representatives of the local Extinction Rebellion group, an organization that focuses on the U.S. government’s involvement with the climate crisis, were also in attendance.

The fight against climate change meant something different for each participant. For many young students, it’s a fight for their future.

“I want to have a family someday, and I want my family to [be able to] live on this planet,” said freshman Chad Hearon.

For Extinction Rebellion member Rebecca Lee, it’s about allowing the next generation to become agents of change. “I feel like my generation has failed you … it’s so important to awaken future activists,” Lee said.

Activities such as letter-writing and group discussions pushed for change, but is it enough to make a difference? “As a group, we have more potential to create a movement to demand government action … marches are, in general useless. We’re here to recruit members of direct action,” Lee said.

“I want to have a family someday, and I want my family to [be able to] live on this planet”

Although Friday’s assembly was passive, it left attendees conscious about their futures. Friday’s event is only the beginning of radical change. To Hinman, the CSUMB community has the potential to better the future.

“I feel really lucky to have a good relationship with this university, and I think there are a lot of people here who really want to see some change,” she said.