It’s not in America yet, but we all want one 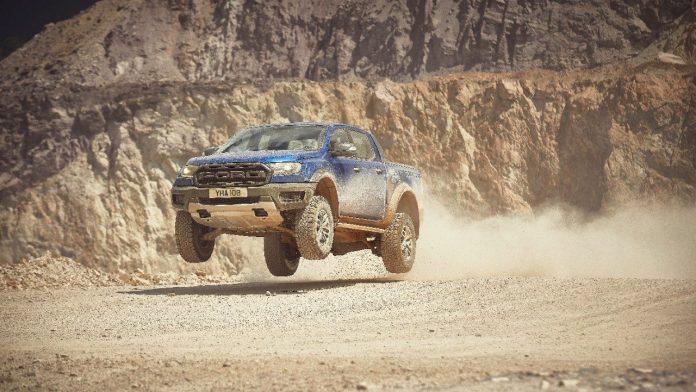 When the Ford Ranger was brought back from the depths of discontinuation with an all new design and purpose, American truck lovers rejoiced. Surely, the intention of the little-truck-that-could making a comeback was to directly compete with the likes of the Nissan Frontier, GMC Colorado, Chevy Bison and Toyota Tacoma – the top fighters of the mid size truck division.

At the front line, the competitors started out evenly matched. That was, until, the idea of a midsized, off-road ready truck began floating over manufacturer’s heads. Thus, all the top names began rolling out off-road specific trim packages with fancy gadgets, gizmos and model-specific suspension setups that appealed to a niche market. It was wildly successful except for Ford, who showed up a little late to the game. Well, at least for the American market.

In the beginning of 2018, Ford unveiled the “Baby Raptor” or Ranger Raptor. Which, given the name, is a baby brother to the gigantic and highly sought after F-150 Raptor. In Europe, the baby Raptor can either come with Ford’s successful and versatile 2.0 liter twin turbocharged four cylinder diesel or a 3.2 liter five cylinder diesel – both of which make just over 200 hp, with over 300 ft lbs of torque.

In the event that it comes to America (which, it most likely will, given how well the standard Ranger and F-150 Raptor sell here), it’ll likely come with either the famous 2.3 liter EcoBoost turbo four or a 2.7 liter EcoBoost V6. A V6 in a smaller off-roader would be an amazing addition to the little truck, since it makes 335 hp and 380 ft lbs of torque – notably more than the engines available in Europe. Though, unless you’re in Europe, Americans won’t see the light of a manual transmission option. Welcome to the ‘10 Speed Automatics Only’ club.

So, what makes the Ranger Raptor so appealing? Well, the overall ride height is taller than the standard Ranger by two whole inches, which doesn’t seem like a lot, but two additional inches can mean the difference between saving or destroying an oil pan off-road. This is even less likely in the Ranger Raptor, since it would come stock with steel skid plates that protect the bottom of the radiator and the oil pan.

Additionally, it comes with Fox racing long travel suspension, as seen in the larger F-150 Raptor. Also borrowed from the F-150 Raptor is the intelligent terrain sensing computer, that brilliantly tweaks suspension, torque, braking and acceleration settings to best match the terrain. Of course, all that is similar to the other competitors in the off-road mid size trucks of the moment, but the F-150 was kicking butt and taking names before the other competitors were even concepts. So, anything borrowed from its larger and meaner brother would automatically make it a winner.

Though, in the event that Ford doesn’t bring the mini bread winner to its homeland, the FX4 option on the standard Ranger is very capable. Some stickers and body mods wouldn’t fool anyone otherwise. Keep your eyes open and your fingers crossed we get the baby Raptor.