An oldie, but a damn goodie. 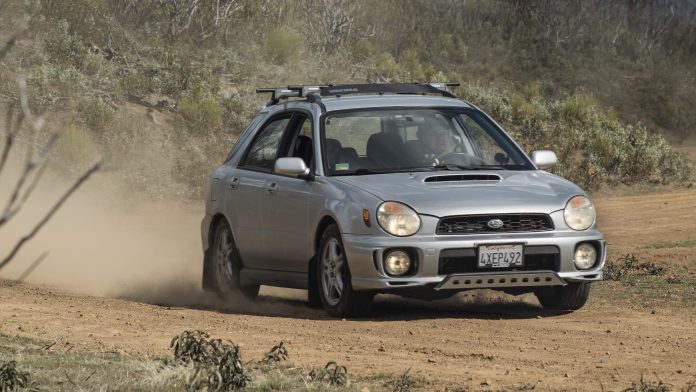 Admittedly, 2002 wasn’t a good year for Americans who liked cars. American manufacturers were coming into the age of caring more about safety and smog regulations. Both valid things, sure, but it meant cool cars were reduced to posters on bedroom walls. Chassis designs were bleak at best, and engines were smaller and ridiculously gutless.

That was until Japan finally submitted to tight American export regulations and sent over the car that threw a wrench in the idea Americans didn’t want fast, fun, and relatively efficient cars. The 2002 Subaru Impreza WRX came to the rescue.

WRX, which stands for “World Rally Experimental,” comes from a lineage that fits the name. The WRX’s predecessor, the Impreza, ferociously dominated the World Rally Cross (WRC) for many, many years with its light, but venomously efficient, boxer engine.

The low center of gravity of the engine combined with Subaru’s still undefeated symmetrical All Wheel Drive (AWD) made it an absolute force to be reckoned with. Though, a lot of their competitors were paying close attention, and started implementing AWD and more powerful engines.

Naturally, with many manufacturers nipping at Subaru’s heels, they decided to up their game. With very minor engine changes and a turbocharger, the WRX was ready for anything. Once again, Subaru roosted in first place. The WRX soon became a car that dreams were made of and America wanted it badly.

Well, in 2002, Japan answered American cries and began to export the car bred from rally champions. What’s interesting though, is at first, Americans hated the outlandish looking “bugeye.” It was just too.. weird. Now, as the bugeye WRX is becoming increasingly rare and cars begin to look more and more like one another, the bugeye is one of the most sought after models Subaru ever made.

Now, with that being said, it’s time to look at this old car with a modern lens. Before I met my fiance Benjamin (whose bugeye I’m currently driving), I’d always wanted a Subaru. I grew up watching rally races with my dad on Sunday morning while bouncing on his knee and I immediately loved the friendly face the bugeye had. It just looked like a happy car, and after being around it and driving it for the five years I’ve been with Ben, I still maintain that thought.

Though, in driving it with the idea that I’m critiquing it, it’s a car that makes me very happy to drive. There’s just something about it – Subaru must have weaved powerful sorcery into the upholstery with this one. Maybe that’s why it won so many rally races, because the drivers were so freaking happy driving them.

By no means is this little wagon a supercar. The engine is a staple Subaru family recipe: four cylinder boxer engine (meaning, horizontally opposed pistons) with a turbocharger that makes 227 horsepower with 217 foot pounds of torque. It doesn’t sound like much, at all, but the car itself only weighs slightly over 3,220 pounds for the wagon version with the manual transmission.

The sedan weighs even less at 3,085 pounds. The thing is, though, this car is not slow – it does 0-60 mph in 5.8 seconds, which for today’s standards is fairly moderate, most sedans or SUVs can do that. In 2002 standards though, that’s nothing to sneeze at.

The rally DNA is most apparent in this car when it’s taken on more spirited drives that involve a bit of crafty cornering. The ride height, a little over 6 inches, is perfect – it sticks to the ground like a prowling jungle cat and that AWD only reinforces that idea. The five speed in it only makes it more fun, since the car is definitely more comfortable in the higher rpms.

My favorite part about all Subarus I’ve ever driven is the steering and visibility; the steering is tight and responsive. With visibility, I would even go to say that this car doesn’t have a blind spot, I can see everything. Also, it’s weird, but everyone who’s ever sat in the back has always said to me (and I do mean always), “This is the first car I’ve ever been in that I didn’t get car sick in!”

Only thing I would say that might make people grimace is the turbo lag. It does take a hot minute for the turbo to kick in and when it does, it’s very, very noticable. It doesn’t seem to kick in until almost 3k rpms and when it does, it’s like the whole car was rudely awakened and gathers a mind of its own. Your head is thrust into the headrest and it feels like the car is gearing up to launch itself into space, so much power is suddenly there.

Granted, it’s something I got used to and adjusted to, but when you’re in a new car that has no turbo lag, the first thing I think of is the WRX. It’s not necessarily something I don’t like about the car, but it’s definitely something I’d rather it not have. Other than that, it’s definitely a car I have on my “To Own” list.