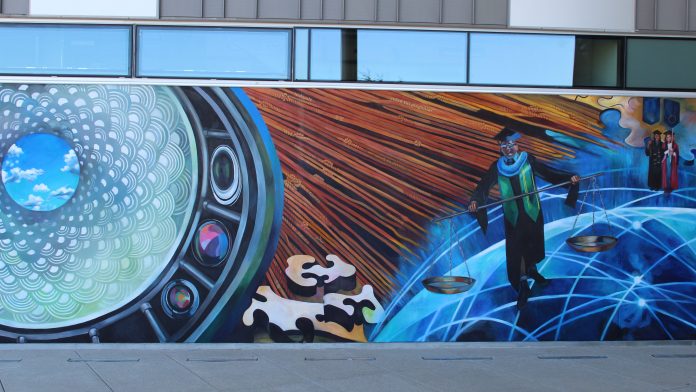 The new College of Arts, Humanities and Social Sciences building is now open, just in time to host classes for the Fall 2019 semester. Otherwise known as Academic III, the two-story building has been in construction since October 2017.

According to California State University, Monterey Bay’s (CSUMB) website, Academic III features over 14 classrooms including those for anthropology, archaeology, oral history and a 200-seat room for film screenings. There is also an amphitheater, art gallery, several gathering spaces and gender-neutral restrooms.

Another unique feature is the mural that greets students at the building’s main entrance, painted over the course of four months by CSUMB Professor Emerita Johanna Poethig of the Visual and Public Art (VPA) department who retired last year.

“The scales of justice are held by a CSUMB graduate balancing on a tightrope of networked intersectionality that lights up the globe: a steward with sophisticated understanding, engaged in the movements for social equity, studying the paradoxes, taking the risks, but always searching for connections,” explained Poethig.

“[VPA] was one of the first art programs in the United States that really focused on art and the way it intersects with society, muralism and public art. Those are broad terms, but it’s also within the curriculum so that students gain the skills to be studio artists and see how they contribute … to the well-being and intellectual and creative life of our whole society.”

As with any major infrastructural project, Academic III faced a few challenges during its production.

“Some of the challenges on the project included a condensed construction schedule due to funding issues, escalating costs and limitations on material availability due to the busy construction climate in northern California, lack of labor forces in the construction trades, and a very wet winter,” stated Project Manager Shelly Niedernhofer and Senior Director of Planning, Design, and Construction Ray Pyle.

The grand opening of Academic III’s VPA art gallery will be held on Oct. 11 from 6 to 8 p.m. in dedication to Roxana Keland, a VPA graduate who passed from breast cancer earlier this year.

Academic III is located on Divarty Street in the former parking lot west of the Joel and Dena Gambord Business and Information Technology Building.