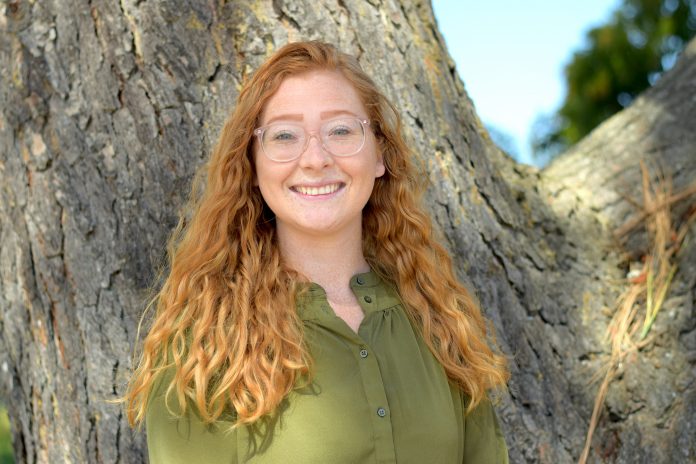 Beth Johnson was nominated to take home the President’s Award by Jeffrey Froshman, a distinguished lecturer at California State University, Monterey Bay (CSUMB)’s College of Business, and Gary Schneider, the lead CSUMB accounting professor. Recognizing Johnson’s natural talent for leadership and accounting, Froshman held high regard for the time and effort she gave to help other accounting students realize their potential.

Schneider admired how Johnson was an empathetic leader and seemed to always put the needs of others in front of her own. Both nominators made sure to mention the amount of time and effort Johnson put into helping other accounting students land internships and establish professional connections, while maintaining high academic standards.

Johnson transferred to CSUMB after earning her associate’s degree from College of Sequoias in Visalia. When she wasn’t crunching numbers and mentoring, she was serving as an outdoor leader for the school’s outdoor recreation department. Coming from a town at the foot of Sequoia National Park called Three Rivers, Johnson grew with a deep-rooted sense of nature. As an outdoor leader, she was eager to teach what she knew to those who were curious and likeminded, but to also gain new skills.

Keeping true to her roots, she also has experience working for both the National Park Service (NPS) as a recreation technician for the Inyo National Forest and the United States National Forest Service (USNFS) as a fee collector. With the NPS, she had tasks ranging from maintaining natural areas by picking up trash to informing the public about trail conditions and creating signs. For the USNFS she also was able to dabble in the financial end of things by preparing deposits, verifying accuracy and reconciling funds.

This is where Johnson became aware of her natural, sharp sense of leadership. Not too long after settling in, Johnson also served as co-president of CSUMB’s accounting society, as well as the treasurer for the Board of Directors for the Otter Student Union for the 2018-2019 academic year.

With her many leadership hats, she served as an advocate, as well as wrote procedures and policies for the OSU. Additionally, she was also providing financial assistance to the Board of Directors. Being a transfer student, Johnson was aware of the little time she had at CSUMB compared to other students and was determined to be as involved as much as she possibly could before moving on. As the co-president of the accounting society, she was single-handedly responsible for choosing local guest speakers to lend insight and advice on how to best pursue their desired career. It also presents the opportunity for accounting students to make professional connections at nearby firms.

Hungry to serve her community, Johnson took the time to plan the school’s accounting networking event, which both allowed accounting students to network with local certified public accountant (CPA) firms, as well as providing information on the firms’ full-time employment and internship opportunities. Johnson wasted no time telling local firms about the event and the presence of accounting students eager for a chance to land a job setting up event budgets.

In her spare time, she also served as a financial and accounting tutor at CSUMB’s Cooperative Learning Center. Johnson was also an accounting tutor for CSUMB’s School of Business. In both areas, she helped guide and teach students about popular accounting concepts and methods, as well as assist instructors in two-day boot camps. Schneider made it a point to acknowledge the regular positive feedback he’d receive from both places Johnson tutored at gave back to him. Consistently, he would have students have nothing but nice things to say about her as a tutor.

As a result of her commitment to accounting and the community surrounding it, Johnson received a $1,000 CSUMB scholarship from the California CPA Society, and was the co-winner of the outstanding accounting scholar.

This past summer, Johnson interned at Ryan and McDonald CPA in Salinas, and has also interned as a tax preparer for the Volunteer Income Tax Assistance. After receiving her bachelor’s degree in business administration with a concentration of accounting, Johnson will be an assurance intern at Ernst and Young in the Roseville office, in addition to earning her CPA license.

When fall arrives, she will be attending University of California, Davis to pursue a masters in professional accounting. Her ultimate career goal is to be a lecturer at a local community college or university, only to further emphasize her natural affinity for leadership and mentorship.

Johnson has served the CSUMB community both loyally and effectively, showing all accounting students that careers in accounting don’t have to be international – they can be domestic, as well. Johnson will fearlessly take the accounting and business world by storm, building up those around her as she goes.