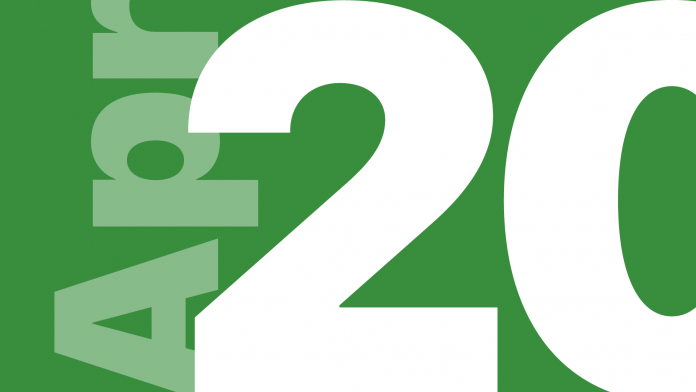 April 20 has become widely known as a day for people to smoke, eat or partake in marijuana recreationally. Here are some events that have taken place over the years, giving the day significance in history.

William Shakespeare’s “Macbeth” was performed at the Globe Theatre for the first time.

George Washington arrived at Grays Ferry, Philadelphia, while en route to Manhattan for his inauguration.

U.S. Congress passed the act which created the Wisconsin Territory.

The League of Nations officially dissolved which gave most of its power to the United Nations.

During the Cold War: Failure of the Bay of Pigs Invasion of US-backed Cuban exiles against Cuba.

Surveyor 3 became the third unmanned American spacecraft to land on the surface of the moon.

Apollo 16 lunar module, commanded by John Young and piloted by Charles Duke, landed on the moon.

Michael Jordan set a NBA record by scoring 63 points in the Chicago Bulls playoff game against the Boston Celtics.

A group of Deadheads in Oakland, CA handed out flyers to invite people to partake in recreational marijuana becoming the first known day 4/20 was celebrated as cannabis holiday.