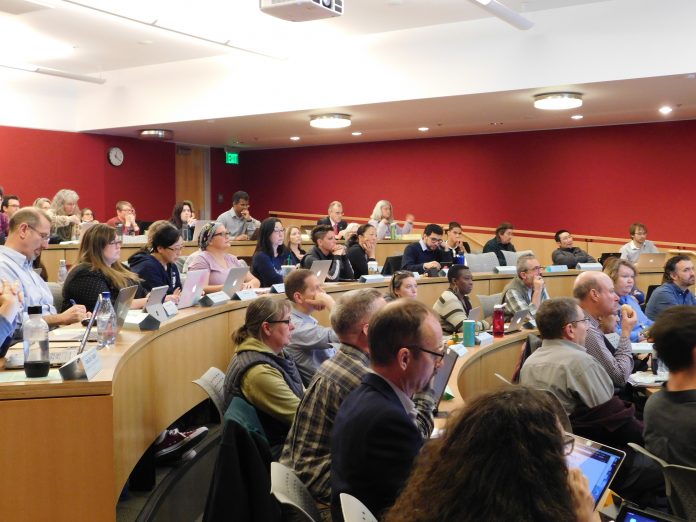 Just days before Spring Break and the scheduled vote to select the new General Education (GE) curriculum for California State University, Monterey Bay (CSUMB), the CSU Chancellor’s Office said one of the models was not in compliance with Executive Order (EO) 1100.

This came after the Chancellor’s Office issued other last-minute mandates that there cannot be lower division University Requirements that would make the educational experience of transfer students different from students native to CSUMB.

The main area of concern is Area C – Arts and Humanities. One of the models that was voted by the Senate to go on the final ballot showed the lower division Area C divided into three discrete areas. This move is not acceptable, according to the CSU Chancellor’s Office.

In the new Model 14-V2, as it is now being called, Bachelor of Arts majors still have a language requirement. BA students have the options to either take language courses up to the 201 intermediate level or higher, take a new upper division Area C course that has a language proficiency requirement, or an approved study abroad course completion. All this could be up to 9 units in a student’s pathway outside of GE.

On the other hand, Bachelor of Science majors have a greatly reduced University Requirement for Languages and World Cultures. They have multiple options which include taking a lower division subarea C2 language course, taking an upper division GE Area C World Culture course with no prerequisite, taking an upper division GE Area C course with a language prerequisite, or taking an approved study abroad course. The new upper division Area C course would require classes where students learn to use a language in their desired profession. All of these options fall within the GE curriculum so there are no additional units outside of GE.

“To have the ability to have a proficiency in language is a part of [what] the whole Liberal Arts area is about and that’s the reason why we have that requirement,” Marylou Shockley, Senator and one of the Model 14 V2 creators, stated in support of this model.

“Language is absolutely essential in enhancing every single major in the Bachelor of Arts,” Meghan O’Donnell, Senator representing the many lecturers on campus, stated in support of Model 14. “Being monolingual would not serve their community and will not serve our students in these majors when they go to the market and look for a competitive job.”

The other model that was approved for the ballot, Model 13, has no language requirement. This has created conflict between departments on campus, to the point where the Collaborative Health and Human Services (CHHS) program passed out a letter urging those to either vote for Model 13, or to include them in the exemptions made for the BS degrees.

“While we care about and support a language option, our program would be severely and negatively affected by a model that requires us to cut units from our current program,” the CHHS letter from states. “While we support the campus offering the option for our students to take a second language (Spanish in particular) which is very important for their future employment opportunities in Health and Human services, we would only be able to support Model 14 if the CHHS program was provided with the same ‘exemption’ as other high-unit majors, i.e., CHHS would be officially approved by the campus administration as one of the (BA) programs exempt from the language requirement.”

The voting on which model will be adopted takes place on April 9. To learn more about EO 1100, please read more articles about this in previous issues of The Lutrinae.

Dear Otters, I would first like to thank all of our readers for your continued support of The Lutrinae this semester. I am incredibly proud...
Read more
Campus