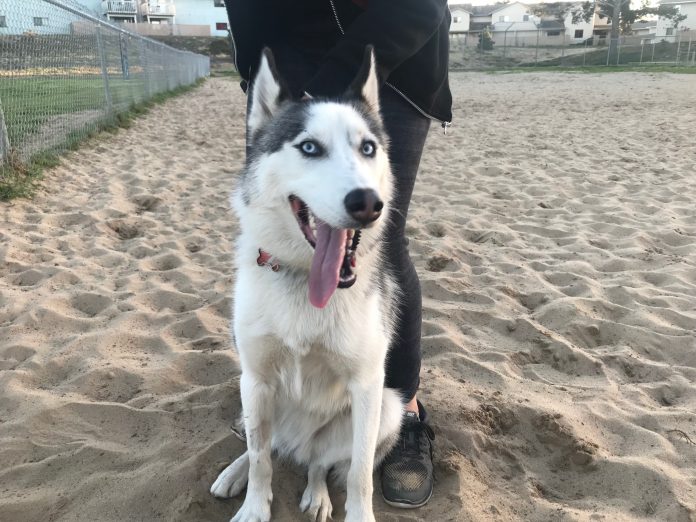 If you live on campus at California State University, Monterey Bay (CSUMB), then there is a pretty good chance that you don’t have a dog. This means that you are probably missing out on seeing some cute furry creatures. For some, there is a certain happiness that looking at dogs can give us. So I am here to spread some joy. I wanted to take the time to introduce a few of our four legged friends at East Campus to those of you who don’t get to see a dog on a regular basis.

In the center of east campus there is a fairly decent sized dog park. It isn’t much, but it has enough space for dogs to run around and enjoy themselves in a safe area. There are two separate fields, one for “small dogs” and one for “all dogs”. Although on any given day there isn’t much happening at the “small dog” area.

If you are someone that frequents the dog park in East Campus with your hairy friends, then you probably know that the owners of dogs only know each other by the dog’s name and adding mom or dad. For example, my roommate takes her dog Sadie to the dog park, so it is common for people to refer to my roommate as “Sadie’s mom”.

The first puppy that greeted me was Apollo. He is a Husky, who is one and a half years old. When asked why she liked coming to the east campus dog park Apollo’s mom said, “He has his little group of friends here. So he can run and play with them all day if he wants”.

Apollo is very energetic and his “girlfriend” is Sadie. The owners of the dogs often refer to a pair of dogs that like to play with each other as a boyfriend or girlfriend. It’s not a mating thing. Just a way to reference the playing patterns of the dogs.

Sadie complements Apollo’s energy. She is 7-months-old and is genuinely crazy. She loves to run and steal other dog’s toys and pretend she didn’t know that they were playing with them.

When she’s not stealing toys she’s stealing hearts. Sadie is a real goofball, true to her lab and border collie mix. She is too smart for her own good and at the same time really dumb. I have the right to say that because I live with her.

“She has a lot of energy all the time. Being able to interact with other dogs and get some of that energy out allows me to do homework” said Sadie’s mom. She, like many other dog park frequenters, enjoys how tired a dog can get after a trip to the park.

The third pup I met was Ske Blue. Ske is a mix of a few different breeds but nevertheless is a beautiful dog. Ske’s two colored eyes stare straight into my heart and melt it. I’m sure they’d do the same to you.

Ske’s dad had a few important things to say about the park. While first and foremost he loves the park and loves having a place to bring his pup. He encourages people in the area to take heed to some of the rules that the park has posted.

Ske’s dad said that in the past people in the community would come to the dog park despite the sign saying for “Frederick and Schoonover park residents only”.

“People come from everywhere. On the internet it has our dog park labeled as the Marina community dog park.” He said that often times this can be an issue because people will bring dogs that don’t fall under the community standards.

“We’re a dog friendly group, doesn’t matter where you’re from, but sometimes we need rules.” Ske’s dad said that sometimes dogs get in confrontations because the outside dogs don’t meet the community standards.

Although there is sometimes this problem with outsiders, Ske’s dad still loves the dog park and brings his dog as often as possible. “This park made me replace my vacuum!” A common occurrence due to the all sand nature of the park.

The last cutie that I was able to interview was Sassy. A beautiful, four year old, border collie. She has fur that makes you think you are in a shampoo commercial because of its glossy waves.

Sassy’s mom said she likes to come to the dog park because it’s a friendly dog park.

“When Sassy comes she forgets that she is a dog and looks at me like she’s saying ‘Mom why are we here?’ ‘When can we leave?’,” Sassy’s mom stated.

“The great thing about this park is that the owners are very responsible.” Sassy’s mom went on to tell me that often times there are dogs that don’t get along. She says that there is a dog that Sassy doesn’t like and if that owner sees that Sassy was at the park rst then she will come back at a later time. And Vice Versa.

Sassy’s mom also said that she has witnessed many dogs get into accidents as well. She says that the dog owners are very kind and will even pay for the vet bills of the dogs who were injured in rough play.

Sassy’s mom said she has been in the area for a very long time and that she loves having a park to bring her dog to.