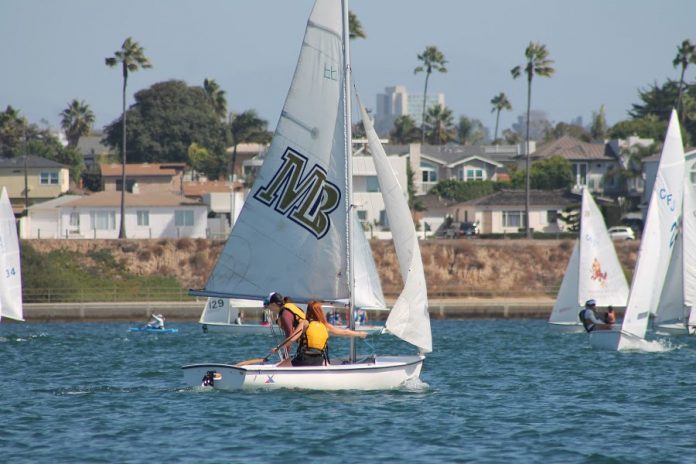 Alicia Ward is the president and chair of the Monterey Bay (MB) Sailing Club. She started sailing at the age of nine in Hawaii. Sailing has allowed Alicia to make friends, find a sense of belonging in a community, and stay busy. Sailing shaped Alicia’s decision to attend California State University, Monterey Bay (CSUMB).

“I can’t imagine my life without it,” said Ward. “It gave me something to do and kept me out of trouble in high school.”

The 12-person team practices at the wharf in Monterey everyday. There are two, two-person boats that teammates rotate in and out of. There’s a motorboat used for safety purposes that also helps the team run a variety of different races and drills in order to improve for their competitions every other weekend. There are different divisions for competing, as well as junior varsity and varsity teams. At the end of a competition, the individual team receives a score.

“I think it’s important for people to know we compete. We compete against Stanford,” said Ward.

The weather plays a big factor in the success of MB Sailing. Extremely windy, rainy, or foggy weather doesn’t allow the team to practice or compete. On the other hand, the team sometimes faces a lack of wind which also disrupts their sport.

MB Sailing Club welcomes anyone wanting to sail, both experienced or inexperienced. There is open sailing for fun and there’s also a team for experienced people who want to compete and race. Skill is not a vital factor for MB Sailing as long as members have the right attitude, time commitment and motivation to learn and grow.

The team works hard and tries to improve everyday in the water, which helps establish traditions in their club and community. “It’s serious but not too serious,” said Ward.

They have an everlasting, friendly rivalry against the University of California, Santa Cruz (UCSC). The team even has a plastic garden gnome who goes to races and events wearing MB attire. In past years, UCSC has attempted to steal the garden gnome, which has added more fuel to the fire.