January Cornelius has earned the President’s Award for Exemplary Student Achievement, the highest honor a student can receive at CSUMB. The special accolade is awarded to a well-rounded student who has made a notable contribution to university life through depth of involvement and service as a student leader, has participated actively and positively as an agent to innovation and action through service on campus and the community and has accumulated more than a 3.5 GPA. Cornelius earned a 3.7 GPA, and will be graduating with Cum Laude honors. She is a Collaborative Health and Human Services (CHHS) major, and will be attending Emory University in the fall to pursue her Master’s degree in Public Health.

Cornelius has served as a Service Learning Student Leader, President of Alpha Kappa Alpha Sorority, a Lifestyle Coach at the YMCA for their Diabetes Prevention Program, a mentor at the Village Project Inc., Chief Programming Officer for Associated Students, Athletics Senator for Associated Students, was a member of the Sexual Assault Awareness Committee, has worked alongside the National Collegiate Alcohol Awareness Week Committee and is a member of the New Student Union Building Planning Committee. Cornelius prides herself in planning campus activities, such as Midnight Madness, and she founded Otterlands, CSUMB’s spring concert. Her two passions are public health and social justice.

Although she is a committed student and trailblazer, Cornelius has a difficult time talking about her accomplishments. She can be found walking around campus in yoga clothes, with an approachable smile on her face. As a small-town girl from Fulsom, Cornelius said, “I spent a lot of my life being the only Black kid in the classroom. That was tough at times growing up…CSUMB was one of the first communities that was vastly different from what I was used to. It was like woah, umm, there’s other Brown people!”

Cornelius did not blossom into the superstar she is now overnight. She credits CSUMB Alumni Miles Scott, an outgoing person who one day randomly stopped her at the Main Quad and told her, “Hey, you!” Cornelius felt intimidated by the bubbly, big guy that Scott is at first, but his outgoing personality inspired her to join the First Year Leadership Council. Without Scott’s guidance, Cornelius would not have been involved on campus, as she has always needed an extra push.

Cornelius credits others for her work, as it is in her modest nature, but the guidance of her mentors is only a stepping stone. The real force that pushes her to be an activist is the need for representation of students of color, and a stronger sense of campus community. Cornelius was inspired to run for the position of Student Trustee, a student representative who is part of the California State Student Association (CSSA), which works in conjunction with the CSU Board of Trustees.

“I remember my first interview [for CSSA], it was at CSU East Bay, and I was completely terrified. I was shaking. I wanted to cry…you’re the only student in the CSU who can vote on student issues alongside the Board of Trustees. The impact really matters; it puts you on the spotlight. It was 27 other people vs. me, which was just crazy and for some reason, to this day, it was one of my best interviews,” said Cornelius. Cornelius recalls being so nervous, she was only able to grasp her cup of water, not actually pick it up. “Student issues are my passion: issues about higher education, issues about diversity, equity, access to food, housing—everything just kind of flowed. I made it past the first round, second round, third round and it came down to a tie-breaker with the current Student Trustee. I made it that far, to almost represent 500,000 students in the CSU. I created a lot of relationships with admins on campus. It was helpful moving forward,” said Cornelius. 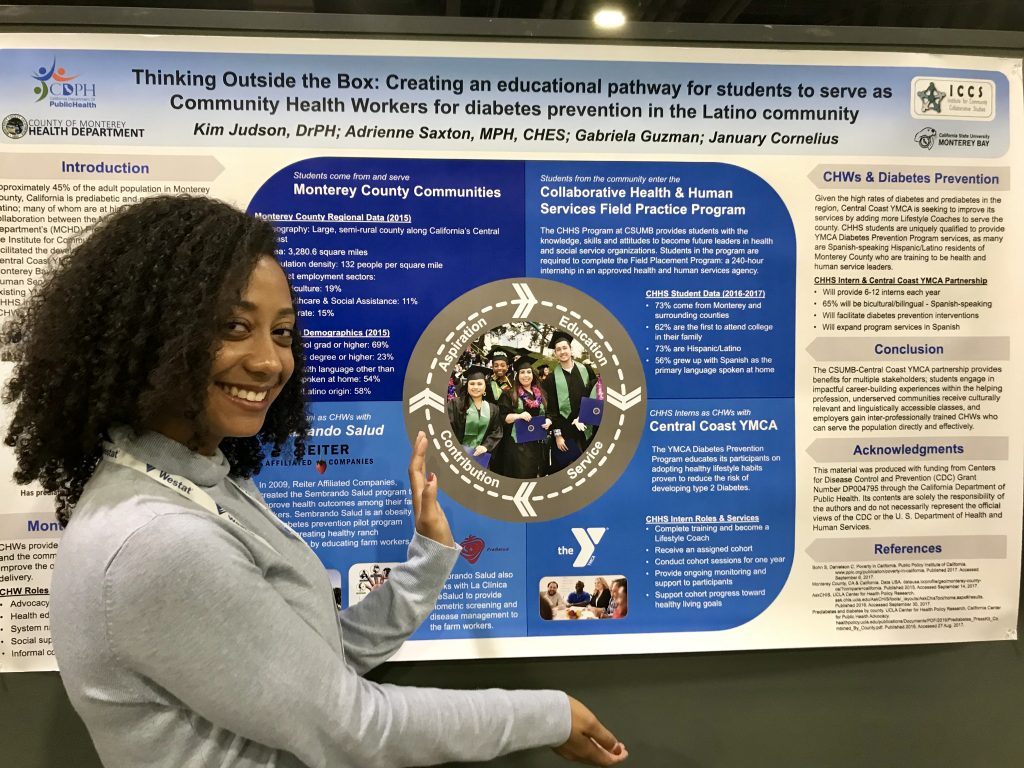 Cornelius found her calling at the Village Project, a non-profit multi-service African-American family resource center. “I feel. I take baggage. I am really emotional. I couldn’t leave. I really had felt something for the kids. For the first time I had really felt like this was my space, because I had never been around so many Black kids at once. They were youth, and that was like—woah… I ended up volunteering for a year, and then I got hired, I’ve been there for two years now. It is the best job in the entire word. It is not easy, there are times that I do not have fun. Dealing with at–risk youth, comparing what they deal with now versus what I dealt with. The Village Project and those kids are my love. My life revolves around them. They’re like my own children, and there’s over 40 of them. A lot of my love goes to them, and I get to see them grow up. It’s really exciting,” said Cornelius.

Although she is hyper-involved, Cornelius finds time for self-care, as she wore a face mask when she found out she was selected for this prestigious award. Cornelius received a phone call from CSUMB’s Provost, Dr. Bonnie Irwin. “I ignored the call from the Provost for two whole days. I actually had met Dr. Irwin in the past. We knew of each other. Finally, I’m at home and the call came up on screen. I was like, what is this? Fine, I’m gonna answer. I’m doing a face mask, I’m working on Capstone, hair up, pajamas on,” said Cornelius. When Dr. Irwin broke the exciting news to Cornelius, all Cornelius was able to say was, “Oh my gosh. Thank you. I couldn’t imagine this. This is insane,” as her face mask hardened and she struggled to smile.

The faculty member who knows Cornelius’s breadth of work and has supported her from the start is Adrienne Saxton, the CHHS Field Practice Program Coordinator. “My respect and admiration for January came from the many conversations we had together, with colleagues, and even with strangers. January is confident, articulate and intellectual. She has depth of understanding of social justice that is rooted in her own history, but also in the knowledge she has gained because of coursework and being involved with our Service Learning institute. After visiting the Center for Civil Rights and Human Rights in Atlanta, Georgia our conversation demonstrated her introspective thinking and depth of understanding of what it takes to be an advocate for change in our communities,” said Saxton.

Cornelius’s advice for aspiring graduate students is that Graduate Record Examinations scores are not absolutely everything. Cornelius only studied two weeks before her exam while on a plane, and she was not pleased with her results. However, her extracurricular activities and her drive are what made her a powerful contender for Emory University. “I don’t want anyone to think I’m perfect. I mess up all the time, I’m really goofy and clumsy, I run into everything…I walked right into a light post and knocked myself completely over…I think that one of the things that I’ve just grown to like about myself is that I’m really silly. People think I’m really smart, and I like to think that I’m smart—but I’m not necessarily the smartest. I’m just really good with people. I can be relatable. I really enjoy people. I enjoy getting to hear people’s stories,” said Cornelius.

Although people have to brag on behalf of Cornelius because she is too humble, she admits she is getting better at sharing her accomplishments. “I am a Black female who just won this award at this school. I’ve overcome some stuff, right? And this is a really big thing, right? I think I do need to be better at sharing. Black excellence is a thing. People of color, Black and Brown, we can do it…We can really accomplish it. It’s extra work. The road is not paved. It is gravel. There are rocks, boulders. You gotta rock climb, but we’ll make it,” said Cornelius.

Letter from the Editor

Dear Otters, To start off, I want to thank the staff, faculty, students, community members and readers of The...
Read more
Local

Founded on June 3, 1770, Monterey is known for captivating locals and tourists with its 99 miles of breathtaking coastline featuring...
Read more
Education

Students of the University of California (UC) and California State University (CSU) systems have filed a class action lawsuit against their...
Read more
Lifestyle

Reverse crunches These are a great way to put your abs to work! Lay...
Read more

Letter from the Editor

Dear Otters, To start off, I want to thank the staff, faculty, students, community members and readers of The...
Read more
Education

Students of the University of California (UC) and California State University (CSU) systems have filed a class action lawsuit against their...
Read more
Campus

Quick Takes, an ongoing series held by the Associated Students of CSUMB (AS), discussed how getting involved in campus translates to...
Read more